It is certainly not for everybody and we have never stayed there, just visiting the place a few times, but SLAB CITY as it is called, is still populated by Snowbirds and year-round squatters from across North America. It takes its name from the concrete slabs and pylons that remain from the abandoned World War II Marine barracks Camp Dunlap there. A group of servicemen remained after the base closed, and the place has been inhabited ever since, although the number of residents has declined since the mid 1980s. Several thousand campers, many of them retired, use the site during the winter months. These snowbirds stay only for the winter, before migrating north in the spring to cooler climates. The temperatures during the summer are unforgiving; nonetheless, there is a group of around 150 permanent residents who live in the Slabs all year round. Most of these "Slabbers" derive their living by way of government checks (SSI and Social Security) and have been driven to the Slabs through poverty.

The site is both decommissioned and uncontrolled, and there is no charge for parking. The camp has no electricity, no running water or other services. Many campers use generators or solar panels to generate electricity. Supplies can be purchased in nearby Niland, California, located about three miles (5 km) to the southwest of Slab City.

Located just east of State Route 111, the entrance to Slab City is easily recognized by the colorful Salvation Mountain, a small hill approximately three stories high which is entirely covered in acrylic paint, concrete and adobe and festooned with Bible verses. It is an ongoing project of over two decades by permanent resident Leonard Knight. I have been blogging about it before and you can access the posting here. 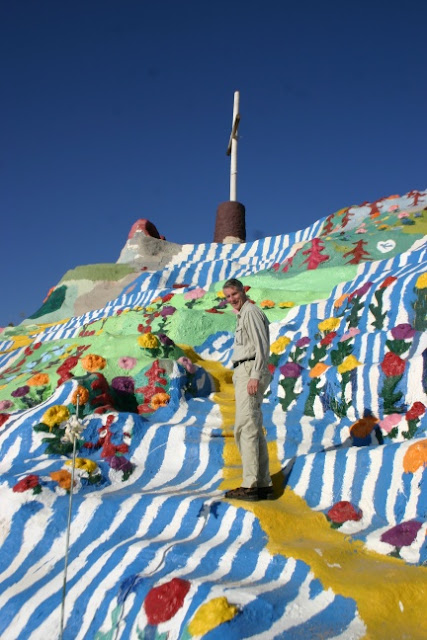 Today was a hot day with temps around the 80F. Nevertheless I went ahead and made a cheese cake. It was a first for me, and since we haven't had a bite of it (the thing must cool down first) we don't know whether it's edible. But I am hopeful. Our friend and neighbour Earl has his birthday today and he should be celebrating today, but the day was marred for him as the fridge in his Motor Home won't work. He replaced two electronic boards, but nothing helped. So part of their stuff is now in our fridge.

So long, friends, stay cool in the heat and warm if you are still up north.
Compiled by: Peter at 10:33 PM