An exciting Day
Here we go again.... another day on the long trail to sun and warmth. Honestly, we got to a lousy start. We got off that Vandalia Walmart at around 7.30 and it was pitch dark. 20 minutes later we had fog so dense we could not see 150ft ahead! I slowed to 45mph and less, but some truckers were just blowing ahead like they had X-Ray-eyes. One or the other word kept revolving in my head, you know.
The fog was surly connected to approaching the Mississippi-Valley at Saint Louis and of course the cold air masses moving in during the night. It was good that we were early out, cause the highway interchanges from I-70 to I-44 was nothing I would like to do in a rush hour. And with the fog still so dense we could hardly see the highway signs, it was just good that we had Hanne, our Norwegian Gal, who miraculously knows her way through town.
Then, as we were getting down the I-44 the fog slowly lifted, and gave way to a mainly grey sky. We knew that wind was in the coming, but hoped it would linger somewhere else, before starting to blow sideways.
It was after a short break around 10am, that Bea noticed Molly was constantly licking herself on her right hind foot. A closer look revealed that her foot was swollen up with an inflammation. See, Molly did hurt herself a week ago, when racing around one of the furnace floor valves in the rig, thereby pulling loose a claw.
I went onto the internet and found a vet-clinic being open today which was only a few miles down the road and right beside I-44. It was the Marshfield Animal Hospital, and when I called they were friendly and invited us to stop by with Molly.
To our delight the clinic was in rural surroundings with a huge front yard to park our Motor Home. We didn't have to wait long and Molly was called in.
She got antibiotics and an overall professional treatment, even a tick was discovered and removed from under her collar. We paid only $50.00 for the whole consultation and were on our way again before 1.30pm.
When we left Saint Louis we also left Eastern Daylight Saving Time and had to set the clocks an hour back. Tomorrow or even tonight we have to do that again as North America switches back to Standard Time for the winter.
Since we were now approaching Tulsa, we had planned to leave the Oklahoma Turnpike at Exit 283 to go down Highway 69 towards Muskogee (Remember: I'm an Oki from Muskogee?) We kinda thought to find a Walmart along Hwy69 to stay overnight, but it turned out that there was a huge truck parking at exit 283 and that's where we ended up today. The area is guarded by a huge (Cherokee?) Indian.  I say DREAM-CATCHER...! 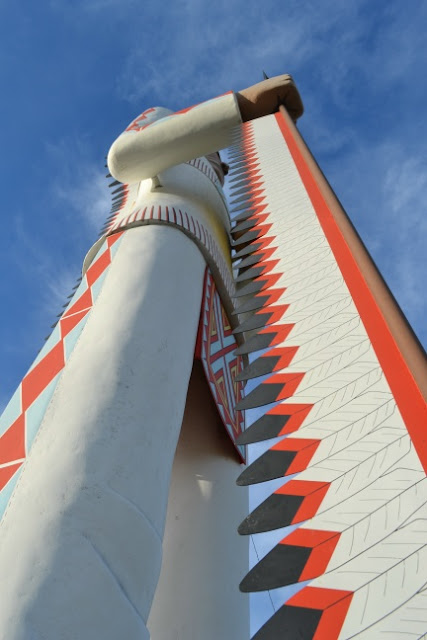