Uih --- September Already, But Is Summer over?

It's the Labour Day weekend already and I can't but wonder where did the summer go? Well, no it's not snowing or anything yet, but by golly, the temps have been creeping downwards with this morning showing 10C and a cold northerly wind blowing down the beach, making me don a sweater and a warm jacket. Beautiful sunny day and clear views across the Bay of Fundy over to Grand Manan.

Yellow flowers growing along the edge of the beach. The fresh fallish air feels invigorating and I notices the same also with Dixie.

September and Labour Day has been marking the end of summer for so many people every year. Cabins are being closed up, campers are going to be parked for the winter. The good thing here on Campobello is that it'll still be another month until we see the beginning of a change of colours in the woods.

For me this is the time to reflect about what we have done and achieved over the last 3 months.

The first big project was the insulating of 2 walls of our house. It was a project that kept me busy much longer than first expected. Strangely, I got a lasting memory of it as I noticed a pronounced pain in my left hip. Did I labour too hard? Did I sprain a muscle? I don't know, but I am still bothered with it from time to time, and it reminds me daily of my age going onto the 7th decade. Geez.......

But we did take a break from work when we hitched on the trailer and went over to Grand Manan. It proved to be a very delightful camping trip.

Being back to the island, our tour and rental business came back to life. The first guests arrived in late June and from there it has just been picking up.

July and August were hot and often humid, but the weather was good for our garden where Bea had tomato plants growing. Also cucumbers, squash and peppers have been doing great in our greenhouse.

Most recently we have been harvesting tomatoes a pound daily. Eventually we gave away to friends and neighbours. Bea even made an attempt with a farm stand in the local saturday market. 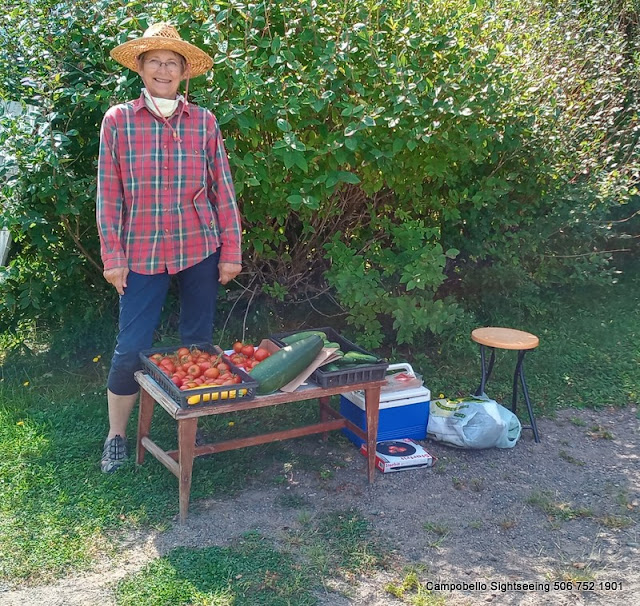 Most delightful were my morning walks with Dixie along the beach. We listened to the singing of the grey seals who had chosen to use the area for the many rocks sticking up from the water under low tide. Some were always lounging in the morning sun, while others were busy prowling the waters for something edible.

Some days it was extremely foggy, others were full of delightful sunshine.

One day a guest had the most memorable experience while visiting Raccoon Beach. He was the only tour guest that day and had paid for two, which is our minimum. We had walked down the stairs to the beach when he asked me for 15 extra minutes on that beach. He told me he was up for a swim!!! From the van he fetched water shoes, and a towel and went into the cold water (14C) While I was watching from the top of the stairs he was plunging and splashing in the water like any kid. But then suddenly he got out and was standing on the shore staring out into the water. After a minute or two he went back in and by the time he was done, he had been out there 10 minutes flat. When he came up the stairs again I asked him why he had been out of the water briefly. His explanation made me smile. He had seen a black head stick up from the water looking at him with interest. The grey seal who had looked at him must have scared him, as he had heard stories of great white sharks prowling the bay. 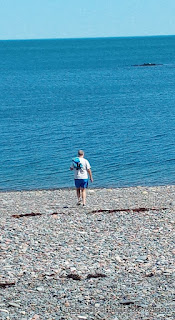 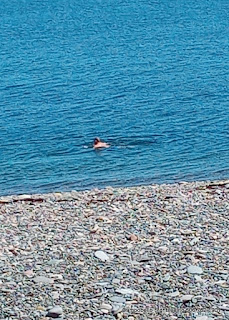 I love my job!

From one of the island gardens Bea brought a load of plums home. And what she made of it was a heavenly delicious German-style plum cake. A feast not only for the eyes but especially for the taste buds. Man, I had a hard time to stop eating. 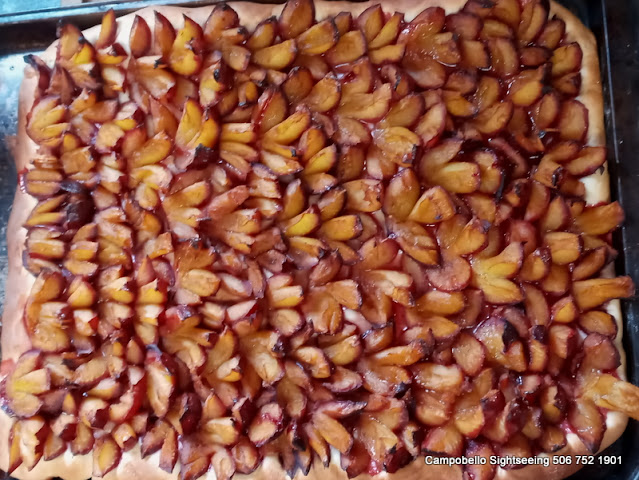 So, when summer and autumn comes to an end and Christmas will be only a month away, we have plans to travel to see the old stomping grounds of the south-western deserts. There will be only a few of our friends we once have been hanging out with, but we will make new friends and enjoy the warmer days, while snow showers will come down on our home up north. 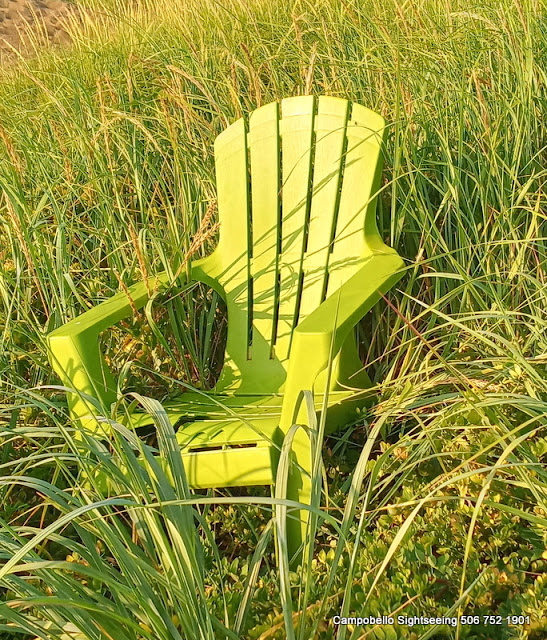 A broken Adirondeck plastic chair sitting in the beach grass
Compiled by: Peter at 10:55 PM 3 comments:

The Truth Is The Truth

The below given opinion was given in a "ground-zero" political discussion, and I find it quite truthful, what the author is saying:

LIBERAL/DEMOCRATIC STATES HAVE BEEN "CARRYING MANY OF THE RURAL REPUBLICAN STATES" AND THEY'VE BEEN DOING THAT FOR A LONG TIME NOW.
And yet the Conservatives/Republicans have long been demonizing socially responsible government involvement in American lives. If rural voters really looked critically at the ACTUAL ECONOMICS and realized just HOW DEPENDENT THEY ARE ON LIBERAL/DEMOCRATIC STATES and those more socially responsible Liberal/Democratic governments they'd probably suffer from a 'broken belief system' and have a schizophrenic 'identity crisis'. Their (delusional) belief in their proud American individualist independence would be shattered.
9 of America's 10 poorest states are Republican bastions and they BEG for more FEDERAL AID (tax payer $'s) than any of the other states. The infamous and forever SLEAZY Republican senate majority leader, Mitch McConnel's state, Kentucky, is ranked the second most federally dependent state in the nation and Kentucky contributes a measly 1% to America's gross domestic product according to the 2019 year-end stats from the Bureau of Economic Analysis.
More than one economically distressed and displaced family from these poorer Republican states has become another homeless statistic on the streets of the more Liberal and progressive states like California and New York and ONCE AGAIN, THE MORE PROGRESSIVE AND "SOCIALLY RESPONSIBLE" STATES ARE PICKING UP THE TAB for the REPUBLICAN CHEATS who, rather than take care of the citizens/constituents they're supposed to represent, KEEP PUSHING THE COUNTRY'S WEALTH UPWARDS TO THE TOP 10% OF THE SO-CALLED
"DEMOCRACY FOR ALL" American COMMUNITY.
The sooner Kentucky (and all the other rural Republican states) goes progressively BLUE, the faster they will stop being LAST IN EDUCATION, LAST IN HEALTH CARE, and FIRST IN BLEEDING THE FEDERAL GOVERNMENT DRY.
You would think they would eventually learn that REPUBLICANS WILL LET THEM STARVE, but given that they are at the bottom in education, they probably can't read well enough (or think critically and rationally) to learn that they have been CONVINCED TO VOTE AGAINST THEIR OWN INTERESTS.
Liberal/Democrats have been okay with helping out those states that are less well off. They are more responsive to the needs of EVERY AMERICAN. Liberals have no problem with the federal government subsidizing telephone and mail service to rural areas — services that would NOT be justified by the CAPITALISTIC MATH of Republicans and the corporate elite. They're okay subsidizing rural health care. They're okay with subsidizing rural education, or opioid treatments, or transportation networks (e.g. roads).
The problem isn't Liberal willingness to help disproportionately rural Conservative brothers and sisters. The problem is twofold: 1) the bullshit pretense that these same Republican people are “anti-government” and that urban Liberals are somehow feeding off the government trough, and 2) the refusal of these same Republican cheats to help when blue states get hit with catastrophe. Instead, Mitch McConnell, Humpty Trumpty and all the Republicans suddenly discover the evils of the huge budget deficit that "THEY CREATED" with their 'tax breaks for the rich' and often wasteful MILITARY BUDGETS — and also a deficit that wouldn’t be nearly so large if Kentucky and the other poor republican state cheats weren't bleeding the country dry, bleeding the COMMUNITY dry.
In FACT, Republican voters are completely impervious to ALL the Republican LIES and CORRUPTION: Since 1969, Republican presidential administrations have had 121 criminal indictments and 89 convictions, while Democrats have had 3 and 1 respectively. And, heaven forbid, let's not forget that a majority of these Republican sympathizers claim to be righteous CHRISTIANS dutifully devoted to law and order despite FACTS that suggest Republican CORRUPTION is UNPRECEDENTED.
Trump lovers completely FAIL to differentiate between Republican socio/economic policies and the more "SOCIALLY PROGRESSIVE and "RESPONSIBLE" policies of the Liberal/Democrats.
Still, once upon a time, Liberals/Democrats and Blue states were like “whatever, we’ve got it good, we’re the United States of America. We’ll help.”
But the sleazy Republican CHEATS and McConnell’s toxic brew of greed, gluttony and cruelty has shattered that pretense.
CONSERVATIVES AND RURAL REPUBLICAN AMERICANS HAVE PRETENDED FOR FAR TOO LONG THAT IT IS THEY, THE "HEARTLAND", THE "REAL AMERICA," THAT SUPPOSEDLY MAKES AMERICA AND THAT LIBERALS ARE JUST DRAGGING IT DOWN. (my god, that's hilarious)
It is Liberals/Democrats paying for the largely Republican rural infrastructure, for their health care, for their Medicare and Medicaid and food stamps and aircraft carriers and all the things that make America func
THOSE RURAL REPUBLICAN STATES WOULDN'T LAST A WEEK WITHOUT LIBERAL/DEMOCRATIC ASSISTANCE.
But not only is there zero appreciation, these brainwashed Republican voters act like they’re the ones being screwed over. Where does Mitch McConnell and these sleazy Republican Bullies get off with their arrogant LIES and HYPOCRACY?
Why are Republicans NOT HONEST and why don't they just refer to themselves as a CORPORATE FEUDALISM? Why don't they be honest and have the dumb and 'poor serfs and uneducated peasants' refer to them as 'Lords and Barons'? (They could even start a church and call it THE PROPHITS OF BAAL.)
Oh wait, that might SHINE A LIGHT on THE ILLUSION/DELUSION OF FREEDOM that Republicans depend on to justify their LIES ! ! ! Those LIES work better than the slave owner's whip did 400 years ago.
REPUBLICAN POLICIES ARE 'DESIGNED' TO MAKE IT SO THE NEVER-ENDING AND OFTEN BLOODY STRUGGLE FOR SURVIVAL IN RURAL AREAS AND ON CITY STREETS ALIKE JUST GOES ON AND ON.
Compiled by: Peter at 6:59 PM 2 comments: