The Horse Is Out Of The Barn

When traveling up from Houston,TX in February, only a few people had heard about Covid-19. Some might have heard about something going on in distant China, something like a virus making people sick, killing some. I stayed in BnBs on the way up. In Michigan I stopped and picked up a trailer, before going on.

A few weeks later, on March 16, Prime Minister Trudeau announced the imminent closure of the International border to the U.S. , a move nobody would have ever anticipated.

But the virus from China had entered Canada and the government wanted to stop the spread across the border.

At that time also U.S. officials knew that the world could change over the coming weeks, but little was done to curb the spread. Italy was already in a severe crisis. They were running out of hospital beds. All-of-a-sudden doctors had to make grave life and death decisions old people had to die, while the doctors concentrated on saving the lives of the younger ones.

At that time the American horse was already out of the barn .
CDC-officials had been fired and the organization been defunded.

While health experts tried to find the horse out on the pasture and get it back into the barn, right-wing media and the GOP sabotaged any effort to rein in the danger.

But Trump had issued a travel ban against certain European nations. He probably hoped that this would be enough to curb the danger.

Covid-19 numbers were still rising fast. And with it the number of Covid-related death. The following lockdowns came much too late. Millions registered for unemployment benefits. Trump got more nervous by the day.

So where is the United States standing today?

Well, Trump's travel ban has been reciprocated by the European Union and while European countries have done their homeworks and reduced Covid cases they are now starting to open up their borders again, but Americans will be excluded from entering the EU. Soaring Covid cases in many states, caused by a too early reopening of the economy and a large crowd of irresponsible beach-goers and protesters is the reason why.

The U.S. is standing back as a pariah. Isolated, pitied and to some extent laughed at, it will be a long time until America will be great again.

And Canada's Prime Minister just made a another announcement: "We will be very, very careful with reopening the border again".

The Canadian horse is in the barn.
Compiled by: Peter at 8:09 AM 5 comments:

This is CORONA SUMMER! 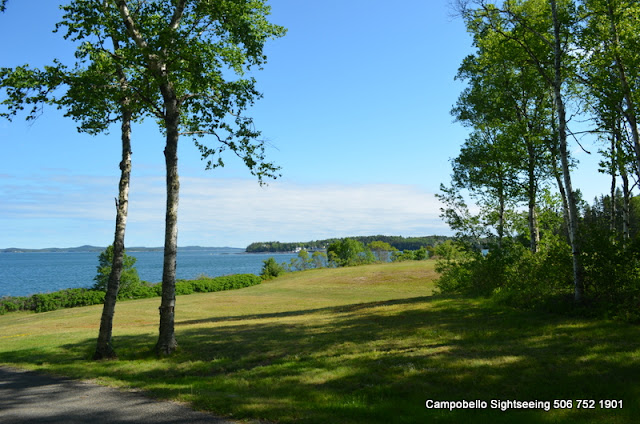 As a guy who loves what he's doing, I am feeling sad when I see all this emptiness, knowing that just outside of our little enclave people are eager to fill up this emptiness, but they can't as a tiny little virus, not even visible, has changed so much with us and our society. 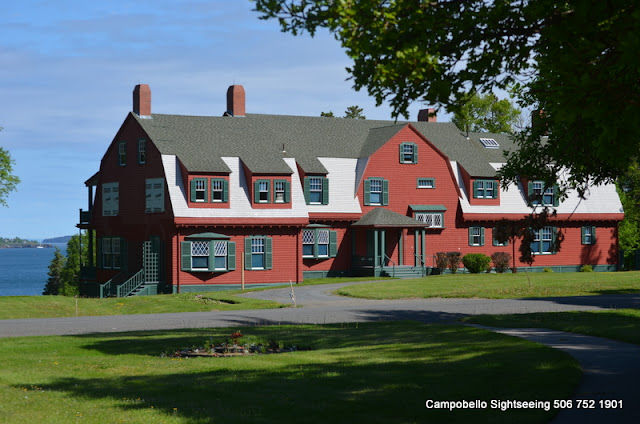 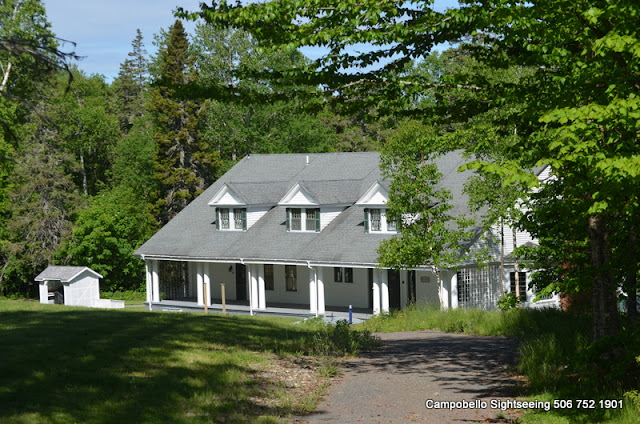 EMPTY: The Prince Cafe and Cottage

I think of this day last year when I had taken people around the island and seen their happy faces and big smiles.
People came from all walks of life and from other countries. 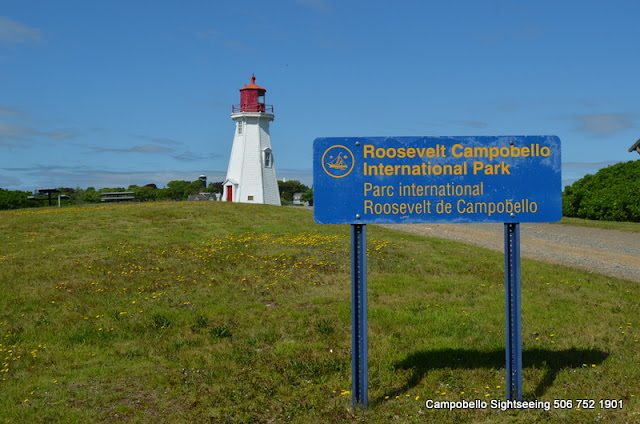 Lighthouse overlooking the narrows to Lubec, ME 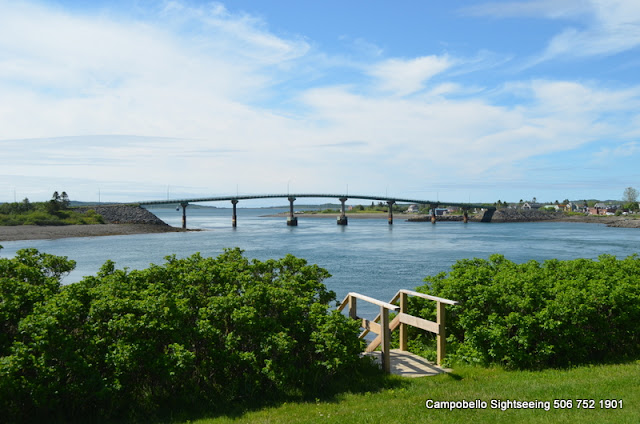 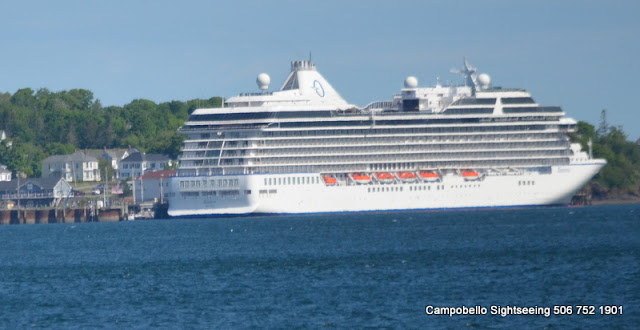 Also a victim of COVID-19: This cruise ship came the other night to Eastport, ME. It is empty of cruise passengers. The ship couldn't find another port to stay in. The multi-national crew is not allowed ashore and has to stay on board for several months. The ship is so huge that it blocks the view of the city. When will it leave again? 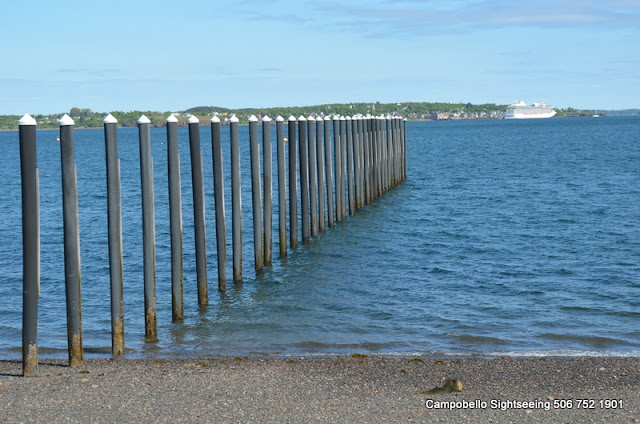 EMPTY: The Roosevelt dock. The park which will stay closed over the summer, hasn't even put the dock in.

They marveled about our huge tides, our whales, our seals playing at Mulholland Point and the rushing water at the Narrows, and our beautiful views all over.

Tomorrow starts the local ferry to Deer Island. New Brunswickers are allowed to visit the island, but will they come?
Compiled by: Peter at 7:26 PM 3 comments:

A Lady With A Strong and Clear Voice

Hello neighbours to the south! Over the last 3 1/2yrs. some of the blog readers have thought I, as a Canadian Citizen, should not be entitled to criticise U.S politics. Of course, the idea comes from utter ignorance of the position the United States has in the world. If you want to be a world power you must also accept criticism from other countries.
But today I have a fresh statement from one of your own - a U.S. governor after Trump "graced" her state with his visit. Here is part of it for you to enjoy:

Governor Janet Mills issued the following statement in response to the President’s visit to Maine:

I have spent the better part of my career listening to loud men talk tough to disguise their weakness. That’s what I heard today.

I don’t care what the President says about me. I care what he does for Maine people.

And that’s not very much.

At a time when Maine fishermen are badly hurting, the President had an opportunity to acknowledge and address their very real and significant concerns – many of which are the direct result of his Administration’s harmful policies.

Rolling back a national monument 35 miles southeast of Cape Cod – one that is currently open to commercial fishing according to NOAA – is not going to help the vast majority of Maine fishermen feed their families. It will not help them pay their mortgage or rent. It will not support an industry that is struggling under the massive weight of an unprecedented pandemic and misguided Federal policies.

What Maine fishermen need from this President is a better trade policy from his Administration, not misguided plans for retaliatory tariffs which have been shown to do more harm than good. They also need more Federal financial support, as I requested months ago.

The President’s absolute lack of any leadership whatsoever during this pandemic has only hurt, not helped, Maine.

Mr. President, I do not take advice from someone whose failed leadership and lack of preparedness has contributed to the deaths of more than 100,000 Americans, including nearly 100 here in Maine.

Maine CDC reported today that three more people have died in our state and thirty-six more were infected. That may seem like a low number compared to other states. Our numbers are comparatively low precisely because of the actions we have taken.

When I entered office and far before we knew there was a pandemic on the horizon, I rebuilt Maine’s public health system which was decimated under the previous administration. I hired some of the most qualified and highly respected public health professionals to rebuild our healthcare system. I paid off the previous administration’s debt to the federal government, and I saved millions in the Rainy Day Fund to bring it to a record high. I created an economic development plan to strengthen our economy for the first time in more than twenty years, and I brought Republicans, Democrats, Greens and Independents together to restore civility and normalcy in our state.

When the pandemic hit, I, along with my fellow governors, pleaded with the Administration for months for Personal Protective Equipment to protect our frontline workers and for testing supplies so that we could prevent the spread of the virus and begin to loosen restrictions on our struggling businesses. With no vaccine, physical distancing was our only tool to prevent Maine from becoming a hotspot like our neighboring state of Massachusetts.

The President told us to find it ourselves. So we did. Maine more than tripled our testing capacity through our agreement with Maine’s own IDEXX so that anyone suspected of having COVID-19 can be tested in Maine if their doctor thinks it’s appropriate, which allowed us to move into the first phase of our reopening before many of our fellow states.
Compiled by: Peter at 7:30 PM 1 comment:

A Cold Fog Is Moving In

It's finally June and we can wake up to better temperatures and a sunny sky. In fact, we've had quite a few beautiful days already. 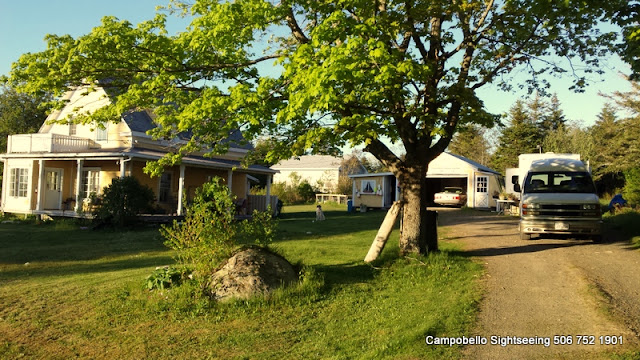 Taking advantage of the nice weather, I have been working on our greenhouse project and as you can see in the picture, it is coming along quite well. 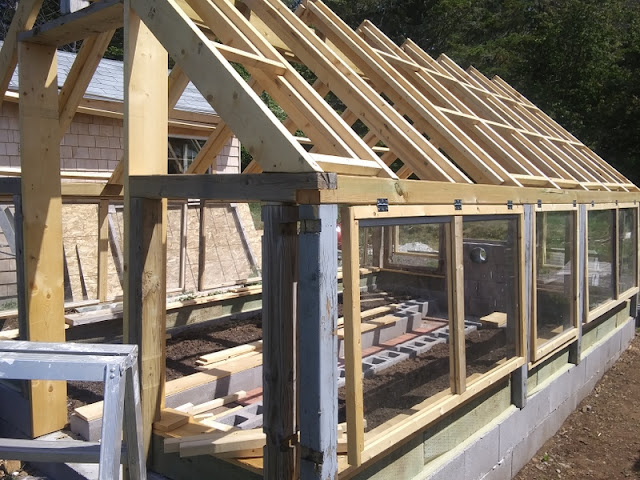 But I wanted to tell you about something different.
On this beautiful morning I decided to take Dixie for a beach walk. Arriving at the water, I threw off my outer jacket, leaving just my light hoodie jacket on.
Dixie had a great time running back and forth exploring beach treasures. She found 2 bottles she could bury in the sand.

We made it to the big root, when I noticed the darkening sky and saw that cold wet fog was moving in from the south. We turned around and then it got really cold and dark. We were both glad when we had reached the van again.

And then it hit me that something symbolic had been happening. The fog had been moving up the coast from the U.S. and it was telling me about the increasing political and mental fog America is being swallowed by. A fog that has darkened the country to a scary landscape where contours and landmarks are vanishing. What once was a great prospering happy country is becoming a nightmare of violence and division where basic rights are violated every day.
Civil disobedience has become a word with 2 different meanings. When armed protesters enter a capitol building, they are called "very fine people", but when others protest against police violence and racial profiling, they are called "terrorists", even though they carry signs instead of guns.
When mercenaries and troops are being turned against their own citizens and the house of the president has to be guarded with armed Soldiers, the country has been turned into a South American Banana Republic, where the person supposed to be a leader, is hiding in a bunker instead of speaking to his people in a calm voice.

The fog is also threatening to hide atrocities against the constitution committed by the government.

The fog is preventing people from realizing that their democracy is vanishing before their eyes.
When the president announces that free speech should only be allowed to his supporters, the speech is not free any more and violates the 1. amendment. The president wants to rule in a one-party system. It's the system they have in Russia. The violation of the constitution is complete and people's minds are stuck in a deep cold fog, where they have problems finding directions as they have lost their compass. 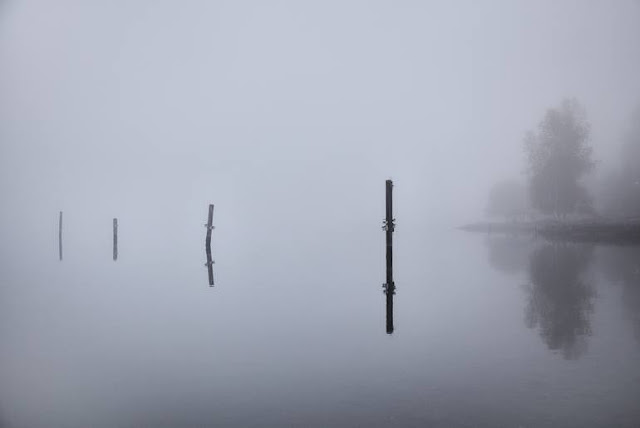 Now, I realize that these words could be spoken from the pulpit at church. But make no mistake, the church has to stay completely separate from the government, which is also stated in the 1.amendment.

Leaders who pose with the bible in hand in front of a church are already on the way to subvert freedom of speech and religion.

Fog in our area is usually occurring when the wind blows from the south. It will only lift off when the wind starts blowing from another direction.

Let the wind blow from another direction in November. Meanwhile, use a compass to find your way. Don't get lost in the fog.
Compiled by: Peter at 10:26 AM 1 comment: