Alamogordo,New Mexico
I don't know what happened, but something with my internal clock didn't work this morning. But when I looked around the corner from our bedroom, Molly was there square on the floor, looking at me. And then I double-checked the time on the cellphone. It showed only 4:25am. But my watch...now wait a minute. I know I adjusted that watch the other day for Central Standard Time. Anyway, let's have some coffee and check the emails and such.
These time zones we are zipping through can truly be a confusing matter. Even Bea appeared early this morning, though it was about an hour later than me. And now we are again in a different time zone. New Mexico means Mountain Time.
Trouble is we are gonna "lose" all these hours in the spring when going east again.
Well, shall we go on with the day's events?
We were out there on I-40 when the very first little shine of daylight appeared in the eastern sky. That Texas rest area which was illuminated the Texas-way with Lone Star and such was a nice clean place to stay at. We had free WIFI and even though the place filled up with truckers during the night we had a peaceful sleep, that is until I got up too early. 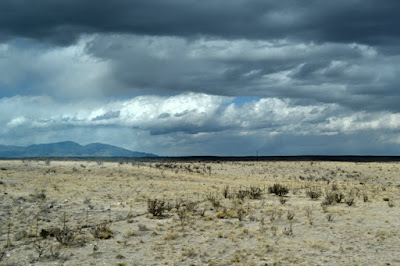 At Amarillo we left the I-40 and ventured into a new area we have never seen before. Actually, that is not QUITE right as we have been through Saskatchewan many times. Yes, it all looked like we were back up in the north of Canada. I mean all ingrediences of the prairie province were there.
Saskatchewan-Style Prairie in Texas
There was a wide open landscape, dotted with grain elevators, there were small towns that barely made a living the agricultural way. There were grain trains parked on the tracks along the road and there was wind.  The only thing we did not see was snow. Thanks God for that.

Well, there was another thing we never saw in Saskatchewan, though it might exist somewhere.
I think of the huge, and I mean HUGE feedlots where thousands of cows are living their pitiful short life with the meat packer waiting for them just a few miles down the road. If the thing itself is not disgusting enough for you, you should actually take a trip down that road. The stench will follow you for good 50 miles.
Talk about stinkin' little towns.
But the road is 200km shorter than going via Albuquerque down to Las Cruces, so I thought to mention that.
The day was mostly sunny, but when we got through the mountains towards Tularosa, the sky turned dark with clouds hurrying up from the south-west. We even had some sleet on the windshield.
But worse than that was the storm we were met with in the mountains. Whew...I hate to drive with those wind gusts shaking us up. So a decision was reached to pull into the Roadrunner RV-Park in Alamogordo. We have been there before and I know I have blogged about the White Sands National Monument, which is kinda down the road from here.
And I guess that's it for today, guys. Two more days and I will be soaking in the Holtville Hot Springs.....Aahh.