When it hits me...
The ceiling fan in the bathroom hadn't been working for quite some time. My early remembrance of it starts 2 years ago, when suddenly the propeller (made in China-Land??) disintegrated and simply fell off the axle. That's when I went to Yuma to get a new propeller. However, the hole for the axle was too wide, so the new propeller never stuck to it, and ever since, the loose propeller has been lying useless on top of the mosquito screen.
Today I decided to do something about it. First I tested whether the little electric motor was still able to make it turn. 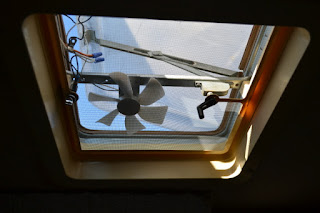 
I by-passed the switch with the wires and hesitantely, and with a screech, it sprang to life. So the cheap little made-in-China-switch had signed off. Huh, where would I get a 12V switch? My mind was set to one of the auto part supply stores.
There are enough geeks out there always trying to alternate a factory-made product.
So again, I went off to town, this time to the city of El Centro.
At an "Auto Zone" store I stopped and went ransacking the shelves. I found a "toggle" switch which should fit through the hole.


Coming through Holtville on my return I discovered a sign at the hardware store: "Auto Chip Keys made her". Now, did I mention a couple of blogs back that we had only one car key left? And that one is a chip-key! Yep, you can't start the dang car with just the metal piece, but it's gotto have a programmed chip in the key.
I went inside to check out the offer.


For less than $90.00 they said they would be able to make the key, which made me a happy camper.  Try a Chrysler dealer and you'd appreciate the $90.00 price tag!
When the key was done, they went out to the car for probing and trying. After 20 minutes of that, they had found out that our car has a stick-shift and that the clutch needs to be depressed for starting. I noticed their relief on the faces when they came back in. But there was another problem. When I tried the new key in the door (there was no remote on it) I could lock the door with it but not open it.
Store employees tried it --- but it did not work in the lock.
This missing little feature rendered the key pretty useless and I ended up with a full refund, still having only one key.


Being in town I had also gotten a few groceries and on my way back I put in a stop at a Mexican Dougnut joint in Holtville. These guys are renown for the best doughnuts in the Imperial Valley.  It is fitting to say that the two doughnuts are intended for me alone, as I know Bea is wrinkling her nose at such disgusting food.


Back home I mounted the switch, but only after I had increased the diameter of the hole a bit. For the loose propeller I had a special trick up my sleeve. For years I have carried a heat-glue-gun with me, and with that I filled the center hole in that propeller with glue. Then I put the thing into the freezer for the glue to get real hard.
After 10 minutes in the freezer I took it out and chose the smallest little drillbit I had to drill a new tiny hole through the glue. Then I pressed it hard on the axle and it stuck. I turned on the fan and everything worked.


That is the kind of satisfaction a handyman needs and I already know how to celebrate. Look down below and you know. 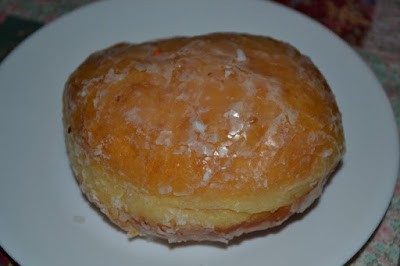 And now it's time to enjoy another bonfire. I just hope that scorpion has disappeared. Maybe I shall have my boots on, huh?
Thanks for stopping by!
Compiled by: Peter at 10:03 PM