What Has This World Become?

At 70 years old, I still had the hope that my world would not collapse in an all-out-war. Now there might be left remnants of that hope only. And a year ago, when I spoke to my wife about how our generation looked to be so lucky not to see the results of a terrible war, at least in our part of the world, I had no idea what was about to come.

The Russian tyrant sure managed to turn the events of this world around after February 24. And of course, nobody knows what status awaits us "at the end of the day".

But the recent months are also giving us a picture of how a dictator could have taken power right here in North America if right-wingers would have gotten their will and destroyed the (fragile?) American democracy. And THAT fight is still not over.

Right now, we read about how the "former guy" has subverted the rule of law for his personal gain, riling up his often uneducated followers and dividing a nation to a point that it is questionable whether it will ever heal again. Mind you, if you check back on my postings of 2016-2020, I wasn't too far off with my predictions.

I know we've lost what we thought were friends in the process, but that couldn't be helped, and I am not sorry for that.

Much of the happenings between 2016 and 2020 which are now getting unveiled, have been caused by following Putin's playbook. Remember a 2-hour talk between Putin and the former guy without having any witnesses present?

Headlines at the time:

Trump: Putin and I have had some very good talks
Trump-Putin Summit: Closed door meeting of Trump & Putin
We can only hope that whatever there is left of judicial capacity will prosecute the guilty ones to the full extent of the law.

And here is what should scare the most:
If "you-know-who wouldn't have been so profoundly stupid, he would have succeeded with his plotting. Fortunately enough, he screwed himself, and today he is in a holy mess. It remains to see whether there is enough brains left in the GOP to finally get rid of the guy or whether they prefer to follow him to the bottom.
Compiled by: Peter at 3:45 PM 3 comments:

The First Strong Winds Of Autumn

This morning we woke up to a radically changed weather. A strong wind had started over night hand was already producing white caps on the Passamaquoddy Bay.

And with the wind blowing out of the north-east the temps took a downward turn which made me grab my jacket before venturing outside with Dixie. But the air was clear, and what I really love with this time of the year is that the colours seem to be so much more intense. The blue of the sky and the water seem to be so much more pronounced.

As we were heading down the beach we came across huge flocks of gulls and cormorants resting on the beach, of course, they took off when we got too close, but they seemed to be lazy as they all resettled on the water.

We were supposed to get a renter for our AirBnB trailer today, but due to the strong wind, the ferry stopped running so our guests couldn't come over, and they don't have passports to take the trip through the US. Later, they changed their reservation for tomorrow, though the wind is supposed to continue with similar strength.

My task for the day was taking care of our monster pumpkin. I cut it off with a saw, then loaded onto a dolly, mind you I could hardly lift it. Then I rolled it to the porch and placed it in front of it for decoration.

As there wasn't much to do today, I headed off to an old apple orchard within the Roosevelt Park to look for some apples to pick. I quickly discovered that there was plenty of different sorts to pick.

Once back at home I made what some people know as "Peter's good apple cake". Want the recipe? OK, here it is, and it is an easy one:

Fill over into round baking form, then spread 2 chopped apples on top, followed by some chopped almonds and cinnamon powder .

Bake about 40 minutes at 180F, check with a toothpick or knife if ready.

The Hottest Adventure Summer Ever!

Hello  everybody! I am still around and kicking. But I admit it's been a long time since the release of last posting. The summer we had, and which is now winding down, has been the hottest I've ever experienced. So keeping up performance wasn't the easiest. We northerners are not really used to extreme temps. And up here in the north-east it wasn't even too dry, as we did get occasional rain showers. But enough said about it.

While tourists, and with that business, returned to the island, the world got into a bigger and bigger turmoil.

Gas prices took a lot of money out of people's pockets (mine as well), and it is only now, towards the end of driving season that prices are falling a bit every day.

We all know the reason for those crazy prices everywhere: Putin's war in Ukraine. But if I am not mistaken, it starts looking up for Ukraine. Putin's reign may even come to an end, as Russians are getting fed up with the toll the war has taken on the country.

But over here on the home turf, things took a much better direction. In June Bea got our greenhouse going with tomato and cucumber plants coming up. And meanwhile we are enjoying the sweetest ever tomatoes and flashy green huge cucumbers. Outside we got corn, peas, green beans and nice potatoes. A huge surprise was this year's harvest of dill and parsley. Everything grew to amazing size and quantity. And even though we are not gonna eat it, I must mention our pumpkin plant. Bea had started it in the greenhouse but had left the rear window partially open. Soon enough the growing pumpkin plant found out about it and stack a vine through the opening. 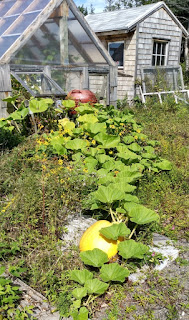 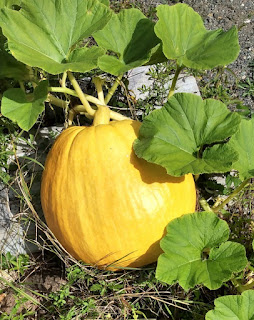 From there is snaked itself about some 20ft into a driveway starting 2 pumpkins along the way. The first one grew to about 20lbs while the second one has me just marveling over at least 50lbs. and a 20inch diameter. And there is still no pumpkin inside the greenhouse!

But the biggest adventure this summer, and it also was a huge learning experience, was Bea's Monarch Butterfly raising. The background for that was that we learned about Monarchs being existential threatened because of their eggs can only be laid upon milkweed. And that plant has been almost eradicated, due to its toxicity. Of course, there are other threats as well, like pollution and diseases.

We have a small spot with milkweed in the garden and so has the local Roosevelt Park. Bea's adventure started by collecting eggs from milkweed, still on the leaves when brought in. Out came tiny small caterpillars which immediately started consuming the green milkweed leaves. Naturally that made for a daily chore to pick milkweed from the garden nto feed these little rascals. They soon grew to the respectable size of 2 inch. One day they were done with eating and hung them selves from a branch or the ceiling of the enclosure, crooked themselves up into a J and then it didn't take long before they entered into a different form of a green chrysalis. While doing that, which only took 1-2 minutes they stripped off their skin, which ultimately fell to the ground.

After about 2 weeks hanging around as a chrysalis, the puppet changes color from green to dark. This is due to a butterfly taking shape inside. And one happy day, the chrysalis is opening up and out slips a ready made living butterfly, which now gets busy drying up and puffing up its beautiful wings. 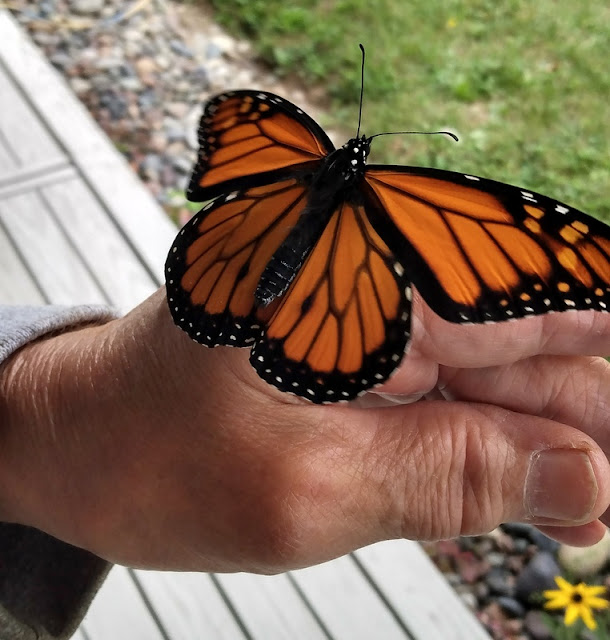 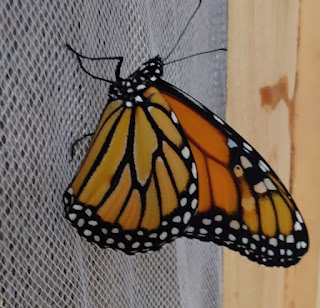 Our neighbour got so excited that she took this as an opportunity to create a butterfly-party where Monarchs could be seen in form of cookies and delicious cakes. 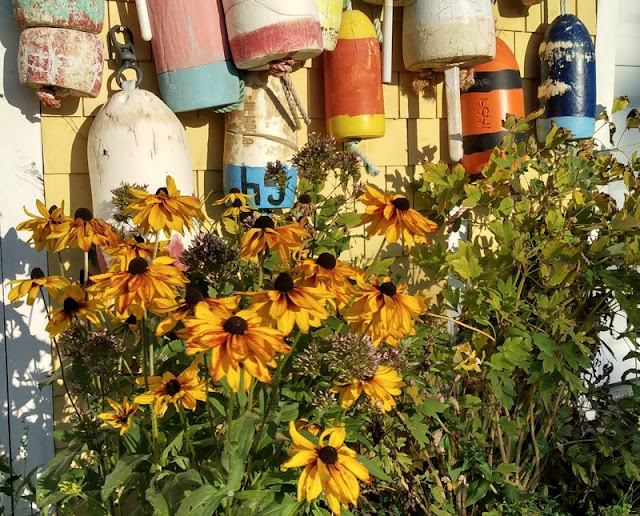 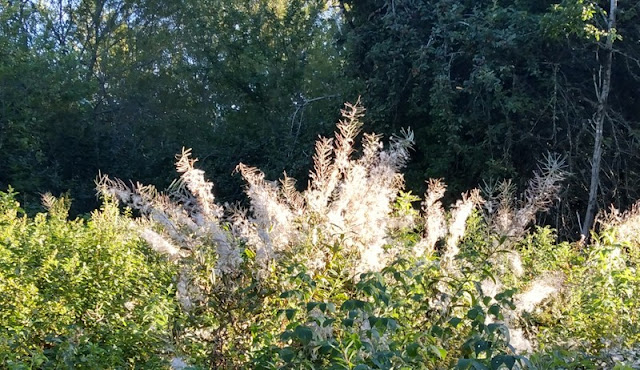 Of course, we learned about the various stages of butterflies in school, but we never knew all the beautiful details about it. Take f.ex. the fact that the genetic make-up for a butterfly is already present in the tiny eggs Bea collected. Or the fact that the caterpillar is going to liquefy itself when entering the stage of the Chrysalis.

When the first butterfly "hatched" we got so excited and even called over a neighbour to witness this wonder. And I was so nervous as a dad tripping in the parking lot!

Since we just had had visitors from Germany, my cousin Anja and her husband Rolf, we now named the first two butterflies after them. The first one was a male so one day we released "Rolf" into the blue summer sky, followed by "Anja". We hope they will find their way to Mexico for their winter stay.

Over 30 other Monarchs have followed them. An experience I will never forget.

And now we are planning our own winter stay in the south again. Due to increased gas prices (and they might rise again) we have focused on an alternative destination for this winter. All I will say at this point is that it is about 600miles less to drive (one way), it is farther south and it'll be in Texas.

Hopefully, I will be getting into a more frequent writing mood again so you will see more postings soon.