This is How Holocausts Happen, How Nations Lose Their Humanity

History is a good teacher.

If we pay attention to her, she reminds us that populations don’t become monstrous overnight, that nations don’t abandon humanity in a single moment, that generational human rights atrocities don’t form in an instant or in a vacuum.

There is always a slow, deliberate, almost imperceptible pattern:

The metamorphosis of a people begins with an opportunistic leader who understands the power of weaponized fear, who feeds them a steady diet of the things that terrify them: misinformation, fake emergencies, and abject lies all designed to create an urgency in them and to make them feel hopelessly assailed.

He or she creates for these emotionally-vulnerable people a necessary enemy; an encroaching threat to tangibly embody the nightmares they have made in their heads—someone to go to war against, to take back their country from—someone he or she can save them from.

The manipulator begins to dehumanize and vilify this group with otherizing language, with ever more caricatured stereotypes, with phony statistics and manufactured stories and edited news; painting the picture of human beings they begin to see as less than human.


Finally, on top of the terror and the untruths and the ghost stories, they wield the greatest weapon people have in the arsenal of systemic discrimination: religion. They wield faith so as to actually make those they manipulate believe that their mission is not just important or right, but holy—that they are being obedient to God while eradicating human beings.

In that state of frantic, perpetually terrorized self-righteousness, they begin to allow everything. They begin to justify all manners of cruelty, all denials of care, all acts of violence—because they are purifying and protecting their divinely-curated country.

Once this happens; once ordinary, rational, decent, even compassionate people begin to lose their ability to see the humanity in front of them—it’s too late to help them see clearly.

This is how holocausts and genocides happen.

This is where historic national malignancies grow.

These are the first steps down a road that at the beginning seems unthinkable.

America needs to listen to History.
She is warning us that we are on the precipice of the free fall.
We can’t afford to go to sleep now.
We need to wake ourselves up.

No one is saying America is anywhere near where Germany was at the peak of Hitler’s power—but Germany wasn’t always there either, and that is the point.

That hideous transformation (like so many before) required targeted propaganda, fake news streams, dehumanizing rhetoric from leadership, an uninformed electorate, religious justification—and a marginalized population to serve as the focal point for the holy war.

It would be completely irresponsible and reckless to suggest that Alabama in 2019 is Berlin in 1941—but it could very well be Berlin in 1930.

We have every ingredient in place to abandon the best of ourselves and to become something monstrous, something History records as yet another shocking failure of the center.

It’s not a foregone conclusion that America could give birth to something as tragic and sickening as we have seen, but we’re stupid and arrogant if we don’t believe ourselves capable, or that we aren’t already seeing the warning signs of bigotry and prejudice taking root. We already have polarized politics, a complicit Church, a stream of fake news stories, and leadership that will gladly fans the flames of hatred in order to hold power.

The question is, whether or not we have enough good people who are willing to push back and to move together across lines of politics and religion and race and nation of origin and orientation—and to declare our interdependence.

Do we have the desire and the energy and the diligence and the courage to join our disparate voices into one singular choir that refuses to stop loudly singing songs of freedom for everyone?

Will we refuse to tolerate injustice in the name of national greatness or divine will; to clearly reject and oppose denials of people’s worth and humanity, even when it comes from our party or our church or our families.

And perhaps most of all, do we have the humility not to imagine that we are too intelligent or spiritual or informed not to become as hateful as we have seen other people become?

May we be our best selves in this moment, so that History one day tells our story as one where decency and liberty and compassion and equality and humanity twisted the plot.
Compiled by: Peter at 6:31 PM 2 comments:

Let's forget the daily tribulations of politics and crony economy for a while and let's talk RVs.

Unless you are owning a 25yr. old wreck of an RV you would know that RVs are expensive. And maybe that's just why you know they are expensive.

Buying an RV will set you back thousands of hard-earned dollars. I know what I am talking about. I have done it way too often. And it's like I am never learning, I did it again in January when I bought another one - this time in Michigan. OK, it was used, a coupla years old, but looking like new.

Like a few years ago, it's a travel trailer again. 32ft long and quite spacious. Unfortunately, our tow vehicle had stage 4 cancer. My mechanic shot me a warning eye, when I mentioned pulling a 7500pound trailer with the vehicle. The cancer had eaten parts of the frame and one of the rear shocks was just barely hanging on.

But I had already signed the purchase contract for a trailer located in Michigan, so what to do?

Challenges of this kind tend to find solutions with me. I went online and found a new tow vehicle. It's a 1t. Chevy Express van. Looks like a younger brother of the old one. If you have read this blog for a while you will remember that I was in Houston for the purpose of picking it up.

Enough said, the plan was to enjoy the warm sun of a desert winter again. Alas, as we all know, nCovid-19 appeared and shut down everything. 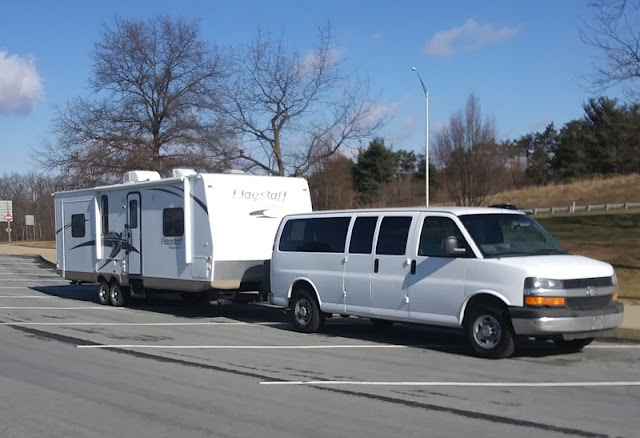 In fact, while I was hastening along the highway in February the virus had already found it's first victims.

Shortly after getting home, the border to Canada was closed.

So I felt kinda f**ked for a while. Another challenge, began occupying my mind: what to do with the trailer?

From time to time we had talked about renting out parts of our house in the summer, but never really did anything about it.

Shortly after becoming AirBnB hosts, we received the first inquiries and then....reservations began pouring in. 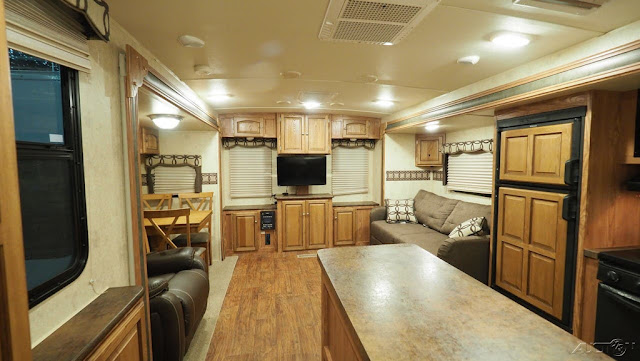 Since June 15 we have been swamped with people wanting to come and enjoy this ever so beautiful place on the fringe of Canada. New Brunswick has a population of  about 776,000 only, but this summer many of those good New Brunswickers came to explore this island. Of course, our tour business was wiped out, but our trailer is rented as we speak.

Why am I writing about this? Well, I know that RVers are out there and some might have the same opportunity as we have. Some might be without an income or even have to make payments on the RV parked in the driveway. You might be able to attract renters for your rig.

You stretch an extension cord from your house to plug in your rig. You fill up the fresh water tank and you are in business. You say you have no dump on the property? Not a major problem. Assuming you have a toilet in your house, you also can dump the waste water. It might be a bit messy, but alternatively. you might also have a public park with a dump station in your neighbourhood. Some gas stations also have dump stations. We use the dump at our nearby Prov. Park.  So once you have figured out the basics you can start equipping your rig for renters. Think "hotel" or "motel" when you do that. If you don't have a breakfast restaurant in your neighbourhood you should make it possible for your guests to prepare a breakfast in your rig. Have Coffe maker, toaster and hot-water boiler for tea. Propane tanks must be filled up and Air Condition and heater should be working. Get 2 sets of bedding so you can change the beds quickly, while the used set is in the washer.

It's really not very complicated to start your own mini motel. AirBnB is widely accepted and sought after and you will never have a marketing problem. They send your money either by direct deposit or you will receive a cheque in the mail. Direct deposit is the way to go though. It's fast and your bank will appreciate the extra flow of money into your account.

Being that busy this summer with Canadians only, we can just start to imagine next year if Americans can come back to Canada.

So why not try it

I Had To Laugh So Hard - I Lost My Breath

The following is an excerpt from a Facebook posting I found on my time line. It is so damn hilarious and dumb that I decided to put a small part of it (there were thousands of comments) on the blog.

While other countries around the world have successfully managed this pandemic, we've seen things get worse. It's not too late for us to work towards recovery, but it's going to require leaders with coherent plans to move us forward.

A virus has brought the world’s most powerful country to its knees.