Not many miles
...we sure didn't do many miles as we just got to the Scarborough turnoff south of Portland, ME. Reason is we stayed 6hrs at the Freightliner facility in Bangor. What took us so long?  Well, well, I kinda knew it would come up some not too-far-away-day. Our outer rear tires needed to be replaced. Just like potetoes, tires are prone to dry-rotting, and that's what happened to ours. Now changing a few tires shouldn't really take much time, should it? But in our case one of the nuts which held the chrome cover in place resisted any attempt to be removed. 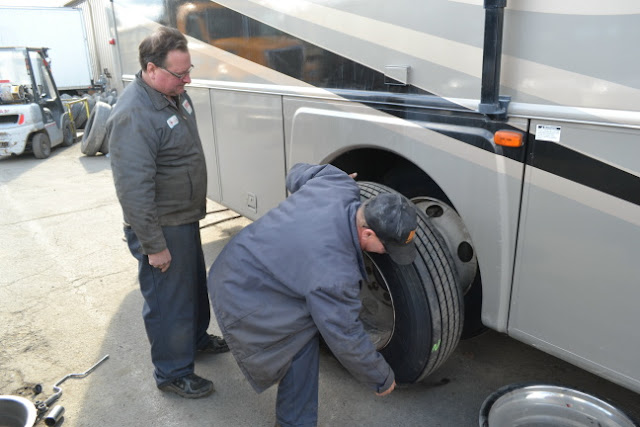 The men worked at it with all kind of tools until at last they came with a long nut-wrench and banged that thing onto the nut, then finally with a screech and a scream that sucker came off. And of course there was lunch hour as well. But the guys did a good job and we can now cruise on south without any fear of exploding tires. 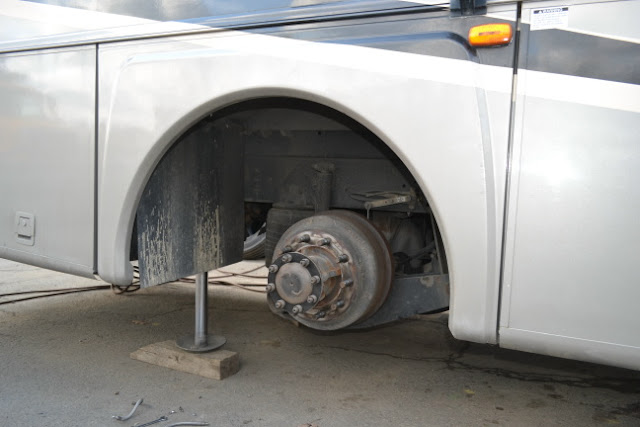 I had run out both hydraulic jacks in the back and liftet the entire rear end of the ground. Isn't it nice that one doesn't need a manual jack for that?
Finally at 2pm the work was finished and we could hitch on the trailer again. First we thought of going back to Dysarts Truck Stop, but still 3hrs daylight we took off south and made it to south of Portland, ME. 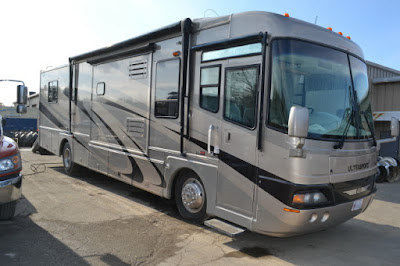 Not much more to say today so I leave it at that.
Thanks for visiting!
Next travel log
Compiled by: Peter at 7:35 PM

Email ThisBlogThis!Share to TwitterShare to FacebookShare to Pinterest
labels Tires