Vandalia where the Vandals are!
Before we were hitting the big-city-mill St. Louis we stopped at Vandalia, and, of course, we sure hope there won't be vandals around tonight. After all we are safely tucked away in a Walmart parking lot, and again there are trucks parked here as well. (is that a new business idea of the Walmart guys?) 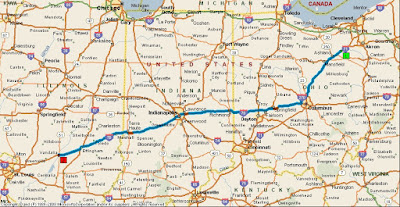 We started the day half an hour before daylight, but by the time we were at Mansfield the night was gone and a blue sky appeared. Great traveling weather alright!
Didn't see much of Columbus as the I-270 leads around it without getting really near the city, which is fine by me.
From Columbus we followed the I-70 which is not a good Interstate to take. At least not at this time, or any time before they have finished a gazillion construction areas.
Some stretches are full of serious potholes and over one particular stretch they have tried to fill the holes with concrets blobs, which actually stick way out of the surface. One of those taken with too high a speed, and you might find yourself and your rig beside the road. 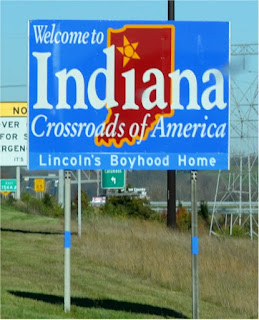 The I-70 gets fairly close to the inner core of Indianapolis and offers stunning views of the skyline. We got through there without any hickups. Mind you, it might be different in a rush-hour. There is also an Interstate 465 which goes south and around the city.
Indiana has very nice rest areas offering wide picknic areas, but for that the weather was just a tad too cool.
However, temperatures increased, once we got into Illinois and here, in Vandalia, where no vandals are, it is downright nice.
Tomorrow we hope to zipper out early here as I have no intention to stay overnight at Tulsa,OK. But that is another story.
Thanks for hanging in here!