What the weather man says...
...I really don't know what to say. This morning the weather was predicted to be fine from about noon. In fact it showed sunshine for Lubec,ME.  And while I was working on the gable putting on wall shingles, I glanced around from time to time across the bay spiding for the slightest sign of sunshine, alas all I saw was a varying density of FOG. And it was not moving. Not at all. 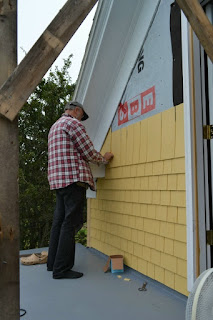 No sunshine, sir. Actually during the afternoon there was a time when it got downright wet outside. The good side of that, however, was that I did not break out a sweat. Normally the West side of the house is the warmest place in sunshine. When I again checked the weather for Lubec this early evening it said:Current condition: SUNNY. I could not believe that. The fog was so dense we could not see the water.
Well, enough of that. I got something done and that was good.
Røde Grøde med fløde på
OK, so you don't know what that is, right? Unless you are a Scandinavian, or a German. In that case you would know that this delicacy is a dessert, which deserves the highest notes in heaven. Told ya I was in the blackberries the other day! This morning there was still a good portion of it in the fridge. And Bea made Røde Grøde of it. It is the juice of (in this case) blackberries thickened to a jelly with starch served with non-whipped whipping creme (fløde) And it is served cold! This Red Grots (or fruit jelly) can be made with any fruit which is red. Bea has more of this on her blog. But you wonder what language that headline is in? Well, it is Danish! 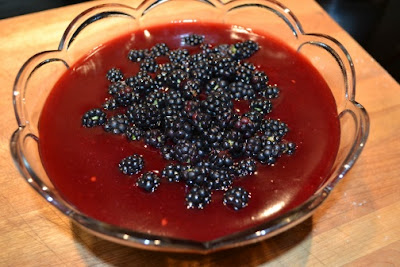 You gotto know that I grew up with it. Yes I GREW with it. When mom had that on the table I could not be controlled. Enough of that too. I can ramble on about food for ever. Bea thinks it's a wonder I don't look like Oliver Hardy!

Then we got a phone call. Somebody from the island informed us that we could pick up our prize items.

"Yep, you won a few items last saturday during the fire hall fundraiser BBQ".  Geez... I had forgotten all about it. Today is TUESDAY right?  So we threw ourselves into the car and were heading out and north. Found the address without getting lost in all that fog. Picked up the stuff and omigod, there was way more than I had expected. Shan't say what it is - cause you're just gettin' jealous.

Tomorrow is another half of a month over! Still so much to do...
Compiled by: Peter at 8:49 PM