Underground and into the Caverns
Before we left The HOT SPRINGS in 2007 we were told that we should pay a visit to the Carlsbad Caverns National Park in New Mexico. So after passing through the dirtiest city in the South West, El Paso, we were heading up Hwy 180 into the mountains. We stopped at the Guadalupe Mountains National Park for one night. We were almost blown away up there by a ferocious storm, but the view of EL CAPITAN was well worth it. I should mention that the drive up from El Paso to the Guadalupe Pass is an extremely long and steep incline and can easily stop your truck from pulling up that heavy 5th.wheel. We were down to the 1st.gear and barely made it with our 14000pound trailer.


Guadalupe has no internal park roads and the visitor can explore the park on foot trails only. But like in all National Parks, dogs are not allowed on the trails.
Anyway there is a lot of history in the Guadalupe Mountains and we should have spendt more time there. But the Carlsbad Caverns were the goal and after a rather cold night at Guadalupe we went off to Whites City.

The road to the Park center leads up into the hills behind Whites City. A big building is on top of the hill housing the Carlsbad Caverns National Park Information Center. Since we purchased the National Park Pass our entry was free. But we rent two information phones as that gave us necessary information on this selfguided tour. 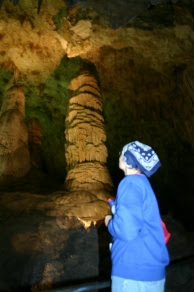 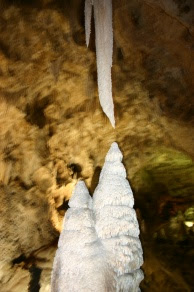 We got into an elevator which brought us 750ft. down into the caverns. As soon as we entered the walkway through the caverns we were overwhelmed by the beauty and size of this cave. We had chosen "The Big Room" and we knew that this cave is just one of 300 caves, where not everyone has been explored yet. The height of The Big Room is 78m, or about 230ft. The stalagtites and stalagmites are beautifully shaped and appear in different colors, though the lighting in the caves is based on white light only. In fact about 1200 light fixtures are installed and a light master, specially trained, takes care of the illumination.
A church-like atmosphere made us whisper, because a loud spoken word will carry 1/2 mile through the cave. And indeed we felt like being in a church. I think if God ever wanted to build a church in his creation this must be it. 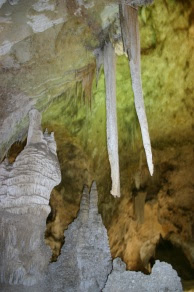 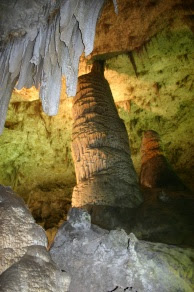 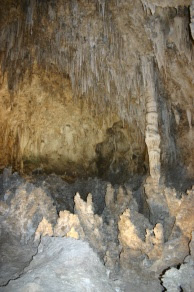 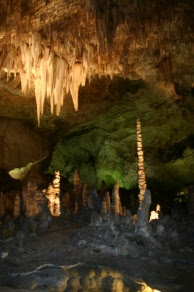 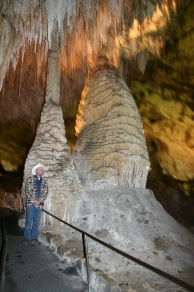 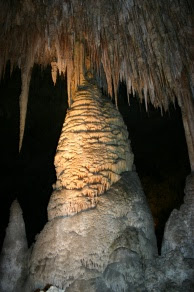 Our tour was 1 1/2 miles long but took us more than 2 hrs to complete. It is an eerie feeling to know that all this is so far underneath the earth's surface.
We left the Carlsbad Caverns the same day and reached the town of Pecos, which basically is a huge intersection between Interstate 20 and Hwy 285. So we decided to stay at a truckstop right on the intersection. The parking area was huge so we backed up against a fence and settled in. During the next few hours dozens and dozens of trucks arrived and before we knew it we were squeezed in between these huge trucks. Well one cannot expect it differently on a truckstop, however what we did NOT expect was that the truckers left their engines idling all night. That provided a certain "entertainment", which, I am sure, many RV'ers have experienced.. 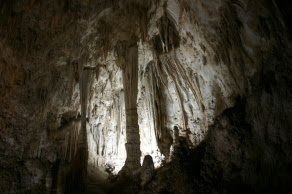