It Wasn't Really An Emergency, But It Could Have Been

He who travels can tell the stories.

We had an extremely peaceful night and I admired the near complete darkness outside. Oh and the smell and quiet of the desert....

Starting out at around 9am, it was drizzling again - at first.

But eventually the dawn of hope appeared at the horizon. Was it an omen? You be the judge. 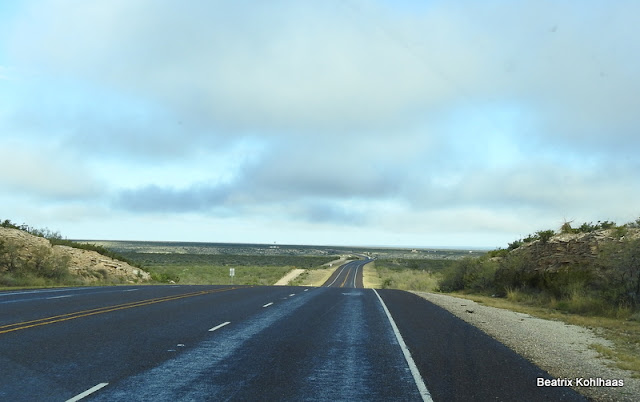 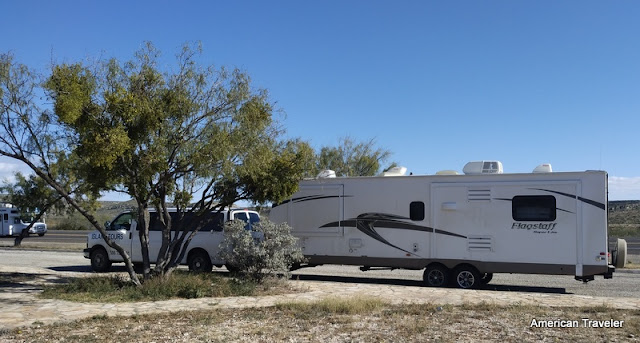 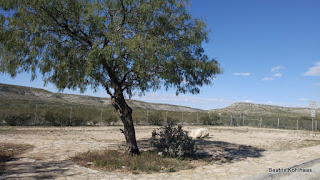 We had a nice rest-stop, took a few pictures and - and then I discovered that the rear passenger side trailer tire looked a little flat.

Checking with my gauge, I was horrified when it showed just 15PSI. That thing was almost flat.

Slowly, we drove on to the next little town, which was Sanderson just 2 miles down the highway. A gas station was closed and their coin-operated air compressor was out of order. Close by, we discovered an RV-Park.

We moved the rig in there, but nobody was around. I checked the spare tire, but it was low on air as well.

So we called our roadside assistance provider Coach-Net. After the 3rd time that they called us back, it became clear that they couldn't find anybody being open for business as on Thanksgiving just about everything is closed in this country. So we set up camp.

When entering the park I had seen a parked Highway Patrol car in front of a small building, but nobody around there either.

Suddenly a 2nd. patrol cruiser came in. I went over explaining the situation and the officer broke out a small air compressor. Would it work?

He moved his cruiser over to our trailer and we started up the little thingy. It took quite a while, but eventually it showed 50PSI.

These officers were so nice and I thanked them over and over for their help.

We could pull out on the road again and drove 63miles to Ft.Stockton. There I checked air pressure again and the tire was down to 20PSI again. It appeared to have a small hole. On the way in to town we had seen what looked like an open tire shop. Going back to it, there was indeed someone busy there. 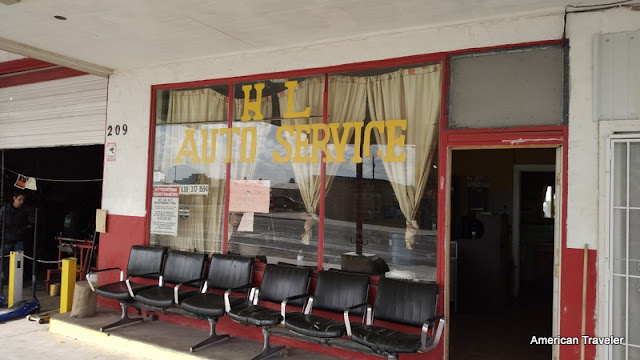 This small Mexican-style outfit repaired our tire and now we got back on the road again for the 2nd time. 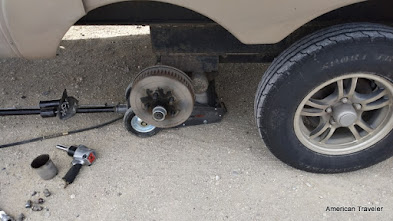 Meanwhile, Bea had found bad news for our further plans to get to Las Cruces. A winter storm coming down from the Northeast would bring strong winds, rain and even up to 6" of SNOW. I was petrified.

Ok, about an hour from Ft.Stockton is Balmorhea State Park where we had stayed years ago. We could make it over there and wait out the storm, right?

The park turned out to be "under renovation" and was not allowing overnight stays. Of course, this is just government employees who are not allowed to think themselves, cause there would have been lots of room everywhere, and, as I pointed out to them, we would not require any services.

Instead they pointed us to a number of RV-parks in town. Alright, we backtracked 4 miles through town and found a graveled site with a few sites with full hook-ups. Only one other rig was sitting there. Instead of a staffed office they had a phone # on a sign. However, calling the number was quite useless as they had an answering service in place, but you couldn't even leave a message as the mailbox was full. Good gracious!

Nevertheless, we set up camp, hooked up to power and water and started the furnace. Not a good site for Dixie has the area is full of spikey goat head seeds.

Now, the outlook for now is not good. Tonight the winter storm will start up, bringing rain and snow. As the I-10 runs up to over 6,891ft there could 6" of snow could accumulate, and it would be snowing all day tomorrow. So it looks like we'll have to spend a 2nd. and 3rd. night here in the town of Balmorhea, TX. For Saturday a strong wind (storm) promises an average of 40km/h speed, which will make it impossible to continue up over the mountains.

Sunday, however we have a chance to finally leaving Texas, which means spending 2 full days in this gravel paradise.

This odyssey is about getting to me. How much bad luck can there be in store for us?

Of course, as bad as it sounds, we are in a safe place, we have food, heat and a full hook-up, and so far not even anybody we can pay for our stay here.

So rethinking today's happenings, I came to the conclusion that all of this could have ended in a real emergency, but thank to our luck, it didn't. Just the thought of being broken down along a busy highway with possibly no cell reception, scares the bejesus out of me. My next purchase will be one of these small air compressors.