Is it a wonder that I slept a lot last night? Called it off early and slept until 6am. That gave me 30 minutes to get ready for breakfast. Stepping outside was like stepping into a freezer. Since my room was at the very end of this long building, I moved the van to the front entrance. The receptionist lady just opened the door, so I was the first guest in for breakfast. It was all rigged up in a former double hotel room. There was much more than one would expect in a motel. I could have made pancakes, had some cereals, and toast with a small burger patty and egg. I chose the toast, the patties and the eggs. Coffee, tea, juice or milk, what ever one might wish. Did I mention that I paid only $59+tax for the room? Not much to complain there.

I left town at 7am rolling north towards North Carolina. First daylight was soon replaced by bright sun. Traffic was light to begin with, but got more dense every time I got close to a town.

Reaching the northern parts of North Carolina I saw snow in the woods and fields. Once in Virginia, snow amounts increased. The chaos of the last weekend was still visible here, though the roads were clear and dry.

I avoided getting sucked in to traffic at Richmond, VA, by choosing the I-295 around the city.

But now I am back on I-95 and the next challenge is the Washington/Baltimore area. But I have saved that for tomorrow. Tonight I stay at another Red Roof Inn in Warrington, VA, which supposedly is part of Fredericksburg. 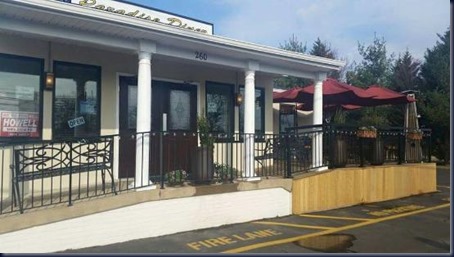 Being hungry, I rolled down Main Street and discovered the “Paradise Diner”. Had to make a 180-turn to get there, but it was worth it. The place is serving Greek and Italian food besides of a few American dishes. I had a Souvlaki sandwich with a Greek salad, and let me just say they don’t save on feta cheese! The marinated pork was doused in Tzatziki sauce and served on a Pita bread.  While looking around, I saw a Greek looking nose walking back and forth behind the counter, so I asked the server. Yes, the owners are Greek. Of course they are, nobody else is using the same amounts of feta cheese and garlic. It might be a good thing that I am all alone here and nobody is gonna join me in the van tomorrow!!!