The storm had moved off and this morning we woke to a clear blue sky. It was supposed to be our last day so we got ready early and headed out to the south-eastern part of Prince Edward Island. Naturally, we got into morning rush hour in Charlottetown, but rest assured, it's not like Los Angeles or Toronto. After 40 minutes we had left all city traffic behind us and were already going towards Point Prim lighthouse. 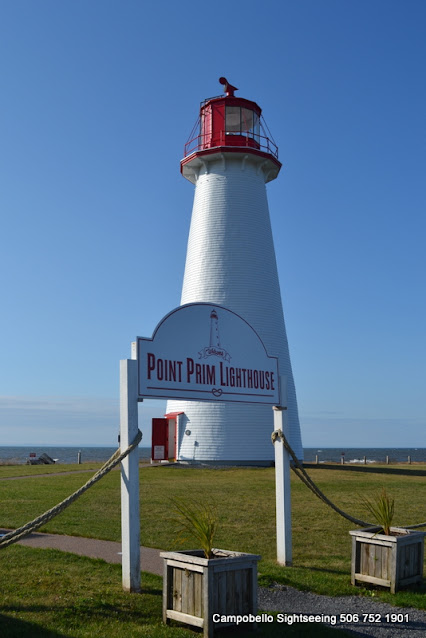 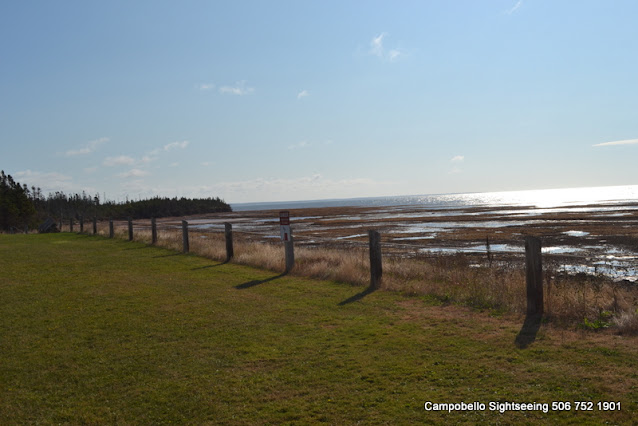 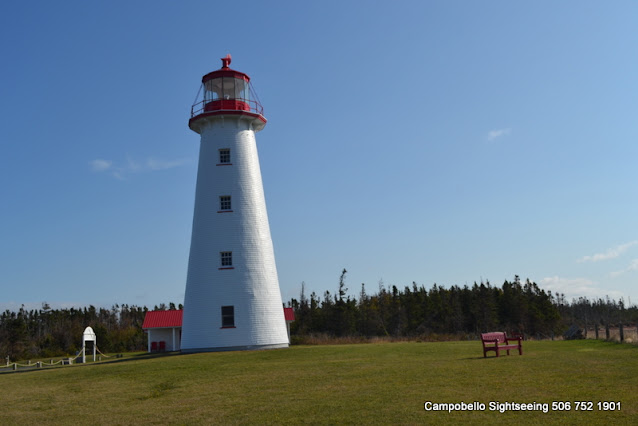 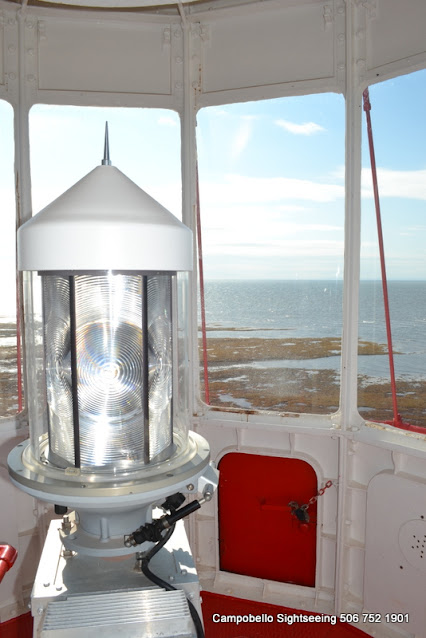 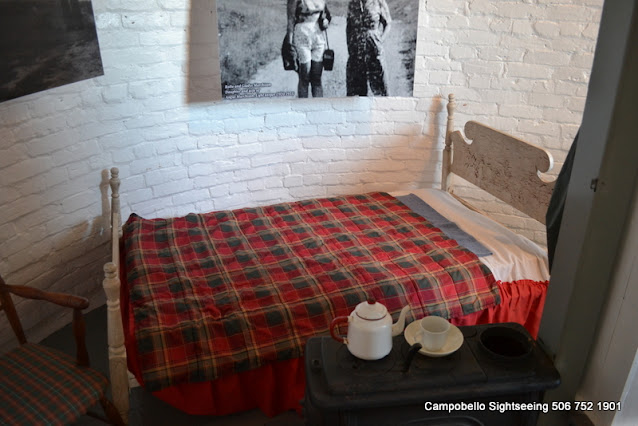 This bed is in one of the upper rooms at Prim Point Lighthouse , while on duty.the Lighthouse keeper got his own cottage, he had to contend with this room.

To our big surprise the lighthouse was still open for viewing. I bought a ticket and a young lady gave me the history of the place. It was built in 1845 and was constructed in bricks. The lower end of the walls are about 1m thick and it is 18.3m tall. The walls are covered in wooden shingles on the outside.

Next lighthouse we visited was the Wood Island's light. 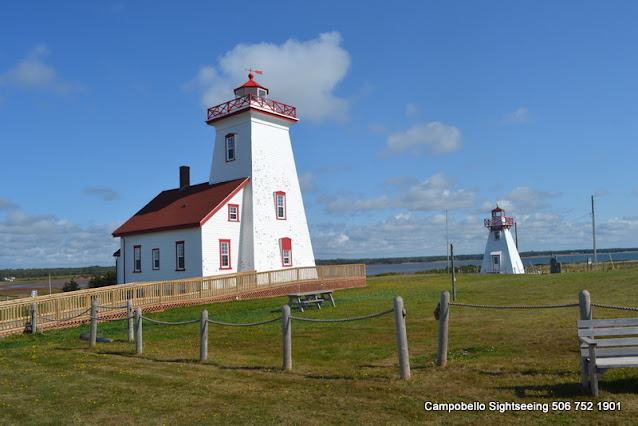 Wood Islands is the harbour for the ferry to Nova Scotia. It's an odd looking vessel, and obviously it wasn't very busy. The Wood Island Lighthouse is a lot different from the Point Prim. Built in 1876 it was moved in 2009 as erosion threatened to destroy the building. It also has 2 small former range lights, both of them have also been moved. The 3 lights together is called a "family".

A much smaller lighthouse is Cape Bear Lightstation. 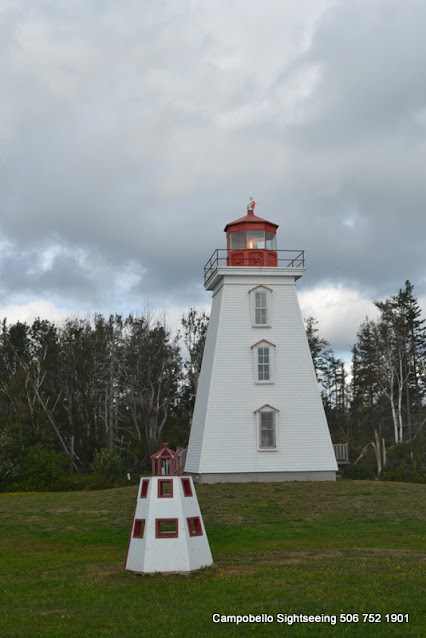 It is only 12.4m high. Due to cliff erosion also this lighthouse had to be relocated in 1947. The Marconi Wireless station was set up in 1905 and it was Marconi operator Thomas Bartlett who received the first in Canada distress call from the Titanic on April 14 1912.

The last and maybe the prettiest lighthouse we saw today was the Panmure Island Lighthouse. On the way out to Panmure Island we stopped at a delightful pink beach which is part of the Provincial Park. We took a shorter walk along which was greatly appreciated by Dixie. 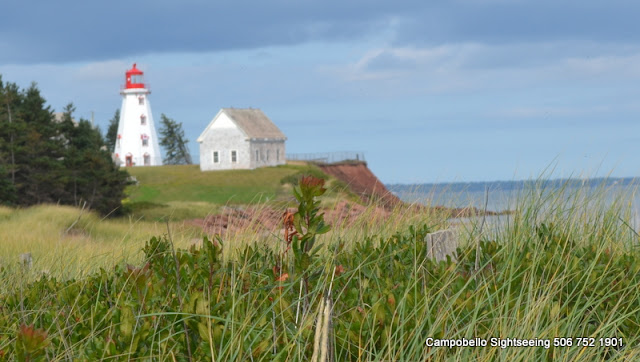 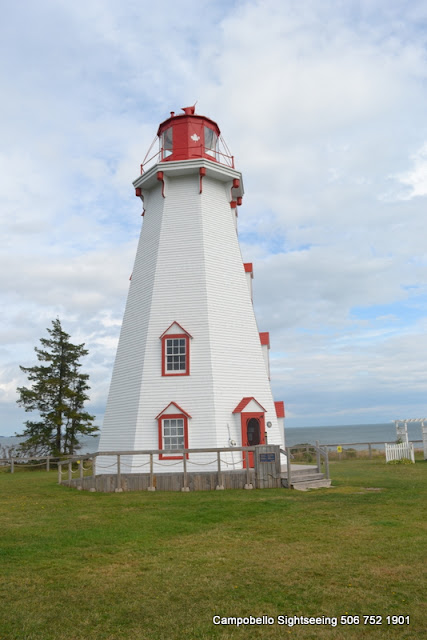 I 1853 it became the first octagon wooden lighthouse built on PEI. It is clad with white cedar shingles. Also this lighthouse is under threat of cliff erosion, and it cannot be moved as there is no land available to where it could be moved.

A conversation with the lady in the gift store revealed that a shore stabilisation project would cost $400,000.

For us it was time to call it a day and we headed home via the nice little town of Montaque.

As we were planning to leave for home tomorrow Friday, I back the van right up to the trailer. When walking behind it, I noticed that our hitch was gone.

Yes, somebody stole our hitch! Since this is a special weight -distribution hitch we cannot just go into any store and buy a new hitch. In hindsight, I figured out where it must have happened. Yesterday I drove to a food market a few miles away. The weather was still bad and I hurried into the store. However, I did notice a loud gang of men in an old beater of a truck in the next parking row behind me. I have strong thoughts that they are the culprits. While I spent 20 minutes in the store they had plenty time to take it off the receiver and disappear with it. A photo I took this morning with the van in the picture reveals the hitch was already gone today.

It is unbelievable what some people will do to make a few bucks. It will cost me hundreds of dollars to buy a new distribution hitch and we won't be able to leave on Friday.