Hazy Skies And A Bit Breezy

Looking out of the window, I could see the sun as an orange ball above the water. But this was not the time for a sunset, but the opposite, the sunrise. The sun was not just above the horizon but already quite a bit up in the sky. So why was the sun appearing orange? The answer to that was the haze we had this morning. And the haze was smoke from the wild fires out west!

Also it was blowing out of the south this morning.

So we decided to do a nice walk along "Long Pond", which is a bird sanctuary, established as early as in 1931, making this the oldest bird sanctuary in Canada. Two large, freshwater ponds, known as Long Pond and Great Pond, are the main features within this migratory bird sanctuary. The Long Pond–Great Pond complex is a good example of a coastal barrier-beach pond formation, in which an expanse of beach protects the ponds from the harsh waves of the nearby ocean.

The trail leads along between a beach meadow and the ponds on the other side, and alternates between forest and open land. This was just so delightful and we had a great time. 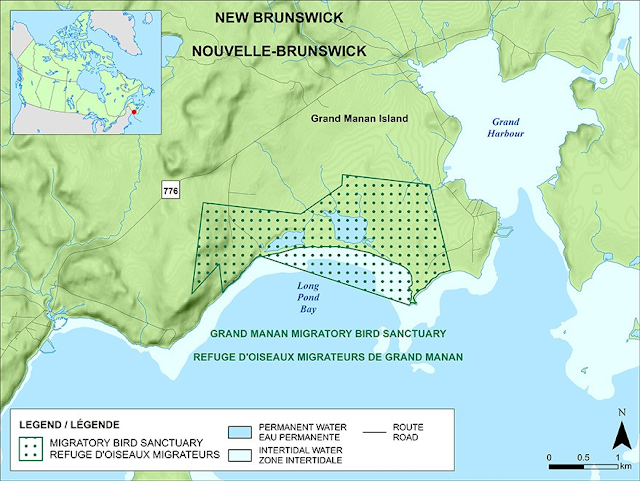 A birds view of the area 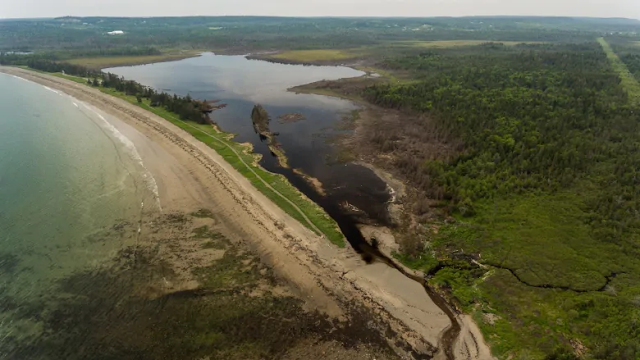 After lunch in the trailer we took off in the van to look for more explorations on the northern end of Grand Manan. First stop was at the famous "Swallow Tail Lighthouse". 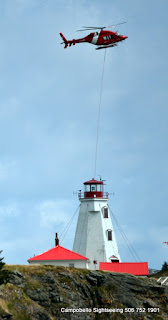 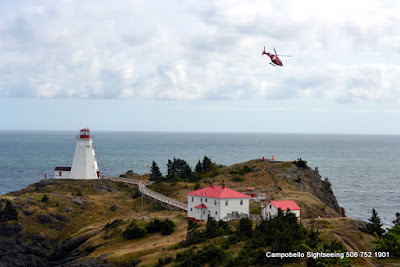 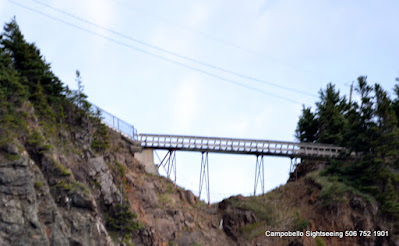 Pedestrian bridge to the lighthouse

Arriving at the viewpoint we saw a helicopter was just busy transporting loads for the coast guard back and forth. Now, the lighthouse can only be approached by foot. The trail leads down a steep concrete staircase and as we started on our way down we received the full force of the southern gale against us. Before I knew it my Campobello caps lifted off my head and tumbled down to the sea. Dixie started whining, as she got afraid of going downstairs, so we turned around. It would have been way too windy anyway.

Our next goal was "Dark Harbour" which is located on the west side of the island. 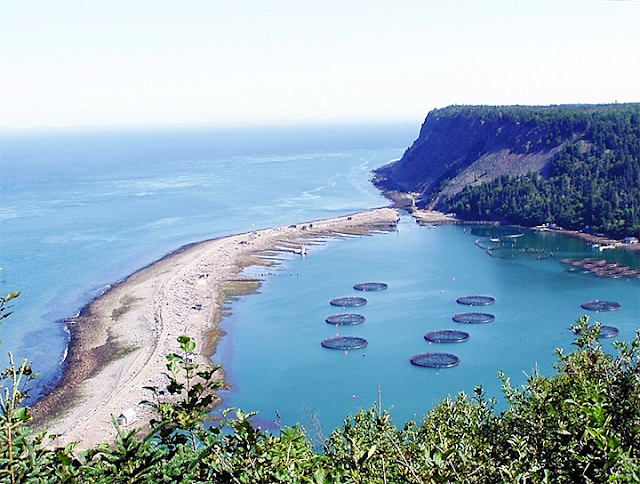 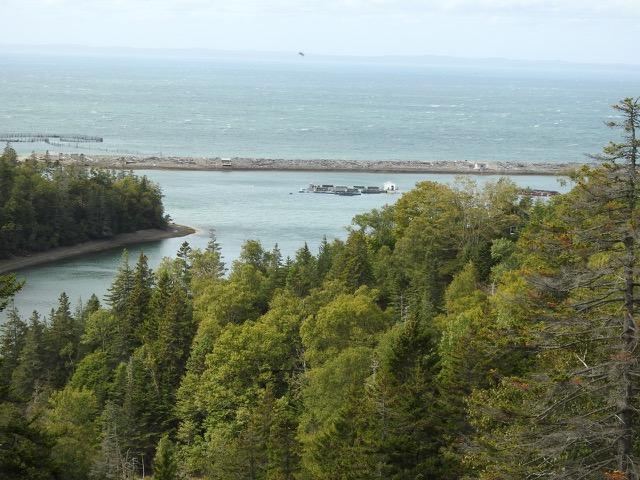 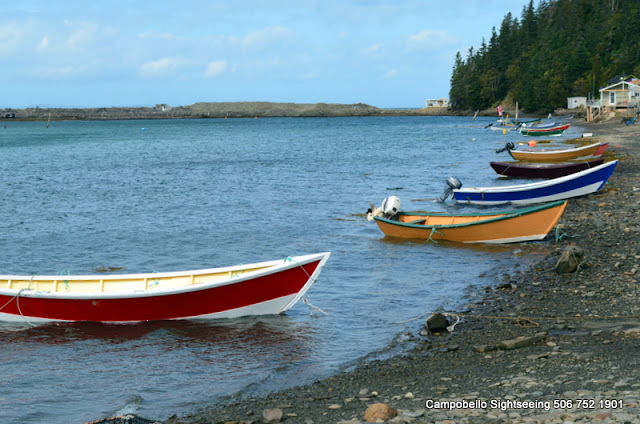 These small boats are used when collecting "Dulse" a tasty seaweed, which is made into a snack. 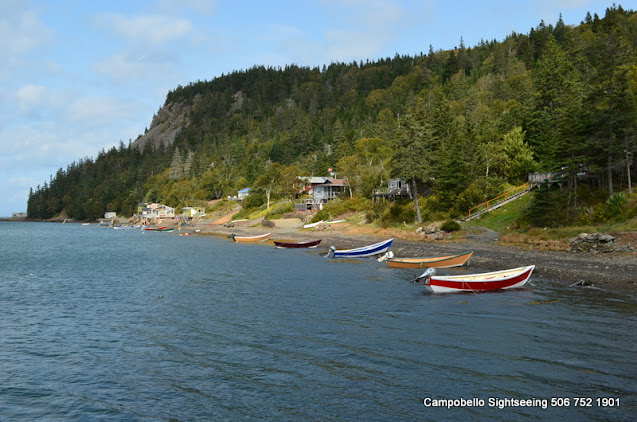 The road over there needs to be driven with heightened care and caution. It is pretty bumpy and also quite narrow. The inner part of Grand Manan looks a lot like an Alaskan wilderness. At least, that's what Bea called it. Here and there a few gravel roads taking off into the woods, but no houses anywhere. Finally, the road is descending in some tight curves down to Dark Harbour. It is basically a saltwater lagoon created by the ocean itself as it threw up a natural barrier. Small makeshift cabins and sheds are the only structures we could find. A number of small "Dulse" boats along the narrow beach made for a colourful photo opportunity. Beyond the outer beach barrier the ocean showed whitecaps, yes it was very windy now.

Dark Harbour sure makes for a special place and it wouldn't be a place where I would want to live.

Seeing the wild ocean and having heard about the development of the weather for tomorrow Bea got a bit anxious to extend our Grand Manan stay with another day, hoping for calmer waters on Friday. So we headed back to North Head where I walked into the ticket office of Coastal Transport. It was easy enough to change our reservation to another day. They are not too busy these days.

The last task for today was to find a hat replacement for me. We tried the Home Hardware store but all they had was a cap saying: HOME HARDWARE and it was still 10 bucks. Then we tried the Harbour Grill and Gift shop. The few hats left after the summer were in pink and lilac - not my preferred colours. Two buildings over I found what must be the tiniest Dollar Store in the world. Just the place I'd been looking for. Their caps hung high above under the ceiling and being 6ft tall, I barely managed to get my fingers on one saying CANADA. Great, so I cannot be confused with being an American. Pun intended lol.! The rest of the day was spent with homey occupations in the trailer and of course, we extended our camp permit for another day.