I Can See A Light In The Tunnel

And the above statement has a double meaning. Of course there is an end of the tunnel when the light shines at the end, For our work project it means we have finished the part of insulating and re-sheating the walls with OSB-sheats. 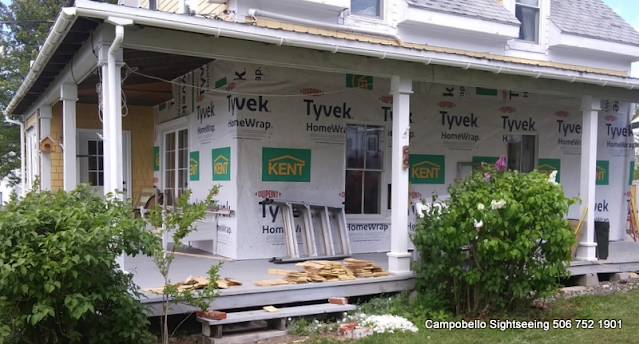 We even put the house wrap up today and doesn't it look like a new house? The last target will now be the re-shingeling of the walls, which is much more fun than working with the fiberglass insulation.

The other reason for the light in the tunnel is that our province has announced a plan on how we are getting back to normal this summer. And if the figures are holding, it is all coming through much faster than expected only a few weeks earlier. The most interesting and relevant part begins on July 1. (Canada Day)

Phase 2 will begin July 1 if at least 20 per cent of New Brunswickers aged 65 or over have received their second dose, said Shephard.

Registration for travel within Atlantic Canada, Avignon and Témiscouata will no longer be required, and Nova Scotia will be included.Travellers from across Canada with at least one dose of a COVID-19 vaccine will be allowed into the province with no isolation required. The same will apply to travellers from Maine, pending changes to the federal regulations, Shephard said.

International travellers with two doses will not be required to isolate, pending changes to federal regulations, and designated isolation hotels will no longer be required.