What Runs At 500mph And is Highly Dangerous?

If you live at the coast you must've heard about the danger of Tsunamis. Recently warnings were issued for the entire west coast of the Americas and Canada. An underwater volcano had erupted in the archipelago of the Tonga Islands. It was a massive explosion, throwing ashes 20kms into the air.

The South Pacific nation of Tonga is still cut off from the world two days after an underwater volcano erupted – triggering tsunami alerts across the Pacific.

Tonga comprises 169 islands, of which 36 are inhabited, and has a population of about 105,000 people

So tonight I was wondering why Tonga was flooded sustaining a lot of damage, when the arriving Tsunami was only about 4ft tall. The question was also why the same degree of devastation would not be caused by a regular storm. After all the South Pacific has always had its fair share of the world's most powerful storms.

So, to investigate this, I dug into the internet, and Bea helped me with finding the best search clues.  What I found was absolutely amazing. Depending of the depth of the ocean, a tsunami will run at jet speed (800kms/h) across the ocean. 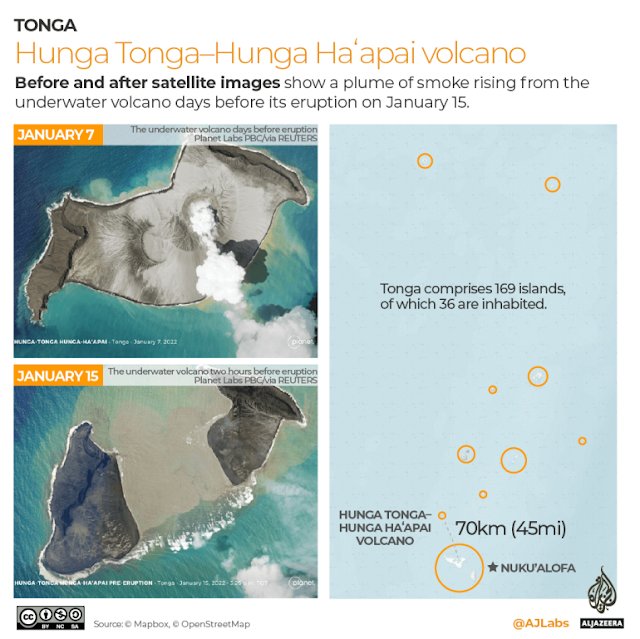 And the erupting volcano is only 45miles (70km) from the nation's capital Nuku'alofa. The surrounding sea at Tonga is about 6000m deep. The speed of the wave would have been 245m/sec or 882 km/h (more than 500mph) It took just 285 sec (4.7min) before the tsunami was hitting the shores of parts of Tonga.

And indeed, it is the speed with which the wave will hit the shore, which makes the difference to a regular storm wave. Storms can cause flooding, but the energy in the water will be much lower as the waves will roll thus losing energy. The tsunami hits with jet speed and creates much more damage ashore. If the nearest coastline would be 3000kms away from the start of the tsunami, the wave will reach that far-away coast line in a little more than 3.5hrs.

As a comparison, you might imagine a truck hitting your house at 30mph. It would cause some significant damage, but if the truck hits your house at 80mph, your house will be gone.

The height of the arriving waves will vary and depend on the depth of the water. Coasts with shallow water will see higher waves than areas where the water is deep along the shore.

We can study the very same effect at the Bay of Fundy, where we live. Campobello Island has an average of 25ft of difference from low tide to high tide. But as the high tide rushes farther north of the bay, it finds shallower water and a much more narrow bay. That means that the amount of water rushing into the bay over 6hours of a running-up tide, will cause much more difference between low and high tide. In fact, as an example, the town of Alma at the Fundy Nat'l Park quite often has a 35ft tide. 35ft is an awful huge amount of water, yet the total amount of cubic meters is the same as around Campobello Island. The difference is the depth and the width of the bay.

You can calculate the speed with which tsunamis will run, by checking out this website: