We Are Getting Ready for Warmer Temperatures

I know that this is probably a provocative headline for some readers. I am fully aware that the North-east is getting pounded with snowy and extremely cold weather. F.ex. our sweet home on Campobello is just enjoying a wild winter storm with wind chills down to -30C (-22F).

But we are indeed seeing higher day temps as we are getting into the middle of the month. And a sure-fire sign of that is that the sunny side of the trailer is getting too hot for hanging out there. So I have to move myself over into the shade. I know, this will be of no interest to read about for you, I'm just sayin..

But we have our struggles too... Thursday I had a 9am appointment at "Dental Solutions" in Los Algodones, MEX. Yes, this is the same place where I got removed an aching tooth during a long-winding session of 90 minutes. Now that the gaping wound had healed, it was time for step#2 - the preparation for crowns. During that procedure my charming female dentist discovered that I had to undergo a root canal first, as a cavity appeared to be dangerously near the nerve. So before I knew it, I found myself back in the waiting area until another doctor called me into his cubicle to do the root canal. And I have to admit, he really was the specialist he introduced himself to be. The professionalism and speed of how he went about it, I had never seen from any other dentist before. Naturally he was assisted by 2 super charming young ladies. LOL.

So once we were done with the root canal I was again moved to another room and back to my previous dentist lady. The next 30 minutes I spent with various pieces of some big-time rubbery stuff in my mouth. I had to bite into it leaving the imprints of what ever was left of my teeth in it. When the stuff was removed out of my mouth it wasn't rubbery anymore. It had all hardened and felt more like a rock now.

It was the last thing I had to go through at the dentist that day. When I hit the street again I felt dizzy. The sun was high up and it was too hot. When I approached the border I saw a pedestrian line-up 4 blocks long and even stretching up a hill beyond the regular waiting area. It was only 12:15pm and the line was longer than I had ever seen before. I had thought of driving our van across the border, but without Mexican insurance it is not a good idea. The line of waiting cars was long as well, but it was moving at a much faster pace.

It took me 2.5hrs to get back into the States.

Monday morning I'm gonna be back there again to receive my crowns. Then it is also time to prepare for 2 bridges. Oh my.....

Today I had a strange coincidental meeting.

When I left the campground I just saw a very special rig leaving in front of me. It was a flat-bed truck with a home-made wooden cabin-style unit on top of it. Seeing it my mind told me that there was something known about it. Hadn't I seen this thing many years ago?

This picture is from February 2012 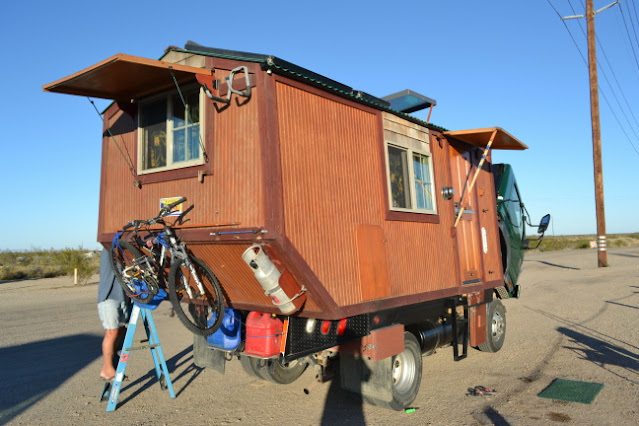 And here is a video link:

Some interesting folks for sure!