What To DO? And What An Adventure!

OK, the cat is out of the sack! The date for Canadians to swamp the US is November 8. Today Bea has started to carry stuff out to the trailer. Rather do it now, than on the last 2 days, when we would forget half of it.

One of the questions I am dealing with right now is what road-assistance company to choose. A coupla years back I had a personal war going on with the CAA, so I am reluctant to sign up with them again. So I had been thinking of Good Sam. But then I read their FB-reviews and I am shocked, to put it mildly, about all the people having had bad experiences with that company, Does anybody out there have a good advice for a good company we can deal with? If so, pls. comment down below.

I am getting glad and happy messages from fellow RVers about their plans going south for the winter. So everybody is really excited. So are also local businesses south of the border, who are eying their Canadian customers returning for shopping, And Christmas is not far off!!!

And while the world seems to return to normal, Covid-19 finally made it to our island. A single unvaccinated person brought is over from the US and spread it first to her 4 kids, then the school and then exposing her church congregation to the virus. How stupid is it possible to be? We got around 20 active cases for less than 800 people and there's gotta be a hundred people currently self-isolating. What a shame. Thankfully, the total number of cases in the US is on the way down. Maybe by November there is real light in the tunnel.

Meanwhile I am still enjoying early-morning walks with Dixie along the Bay of Fundy.

And the other day we got ourselves a little excitement on the beach.

The first glimpse I got was a dark spot in the beach. I was still far away from it but when I came closer I saw hundreds of cormorants sitting along the water's edge.

Overnighters, maybe. At least they had been sitting there as long as the low tide lasted. Dixie was ahead of me and had also seen the Cormorants, and she approached them slowly. As soon as the birds realized the dog they started in groups into the water.

And before I knew it they were either flying off or just walking into the sea. There was hundreds and hundreds of them. The sun was throwing a stark reflection off of the water and I took a few shots towards the Herring weir and the anchored fishing vessel out there.

Then I heard a splash close to shore. I saw it before it was gone again. A seal had jumped and caught a fish.

That sure also alerted Dixie. Dixie is extremely afraid of the water, so she was just standing along the water's edge scanning the surface of the water. 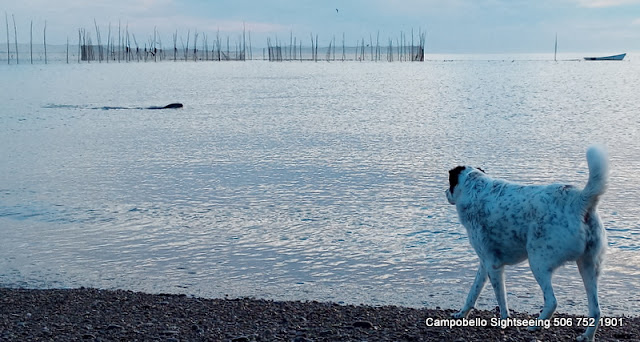 And there the seal appeared again, just 20yrds from land. Dixie was now staring at it, and wouldn't you know it, the seal was looking at Dixie. As we proceeded our walk along the beach, the seal popped up again both here and there and Dixie was always running back and forth following the movements of the seal. It was fascinating to watch the two so different animals.

Thanks for stopping by.