As a kid, did you believe in Santa? Or were you one of those smart-kicks who questioned how Santa would be able to visit all the children of the world in one day only?

Early on, and in anticipation of my inquisitive mind, my parents had made me aware of that Christmas is not necessarily celebrated everywhere on the globe and that some countries had Christmas on the 24th while other kids, mostly in English speaking countries, would first be served with gifts on the 25th. It sure stopped a barrage of further questions to my parents. Albeit, what I didn't know then was that the gifts had to be delivered on the MORNING of the 25th, which wouldn't give Santa much of a leeway to reach across from country to country. And Rudolph the Red-Nosed Reindeer wasn't even known in Germany in those days. But in spite of all these obstacles, I was a believer in Santa for the longest time. Guess my parents made sure of it.

Nowadays we know the real reason for Santa living up to the task. Santa has a large group of helpers all over the world. Yes, folks, that's the way Santa manages to get all over the world. There is a modern word for it: Outsourcing! Young dynamic managers fresh from school have been promoting this for years. It's the reason that if you order an item from say Amazon, it's not really coming from Amazon, but from China or Bangladesh. The moment your order is received at Amazon, it will be forwarded to China where the item goes into shipping. Obviously, shipping from China takes a bit more time than shipping. from say North Pole, AK. I have first-hand knowledge of this, as I ordered a pack of red Christmas candles from Amazon. They did sent me an email telling me that the item is coming as an "import" and that that would be the reason why Christmas and Santa would be gone before I would be able to stick the candles into my Advent decoration. But who would have thought that candles are not available directly within North America?

The difference with Santa's old-fashioned outsourcing compared to Amazon's is that Santa has it's own transportation system of reindeers, and not enough with that, once the Santa helpers come to your village they also use bicycles and some have big red trucks with lots of room for big hard parcels 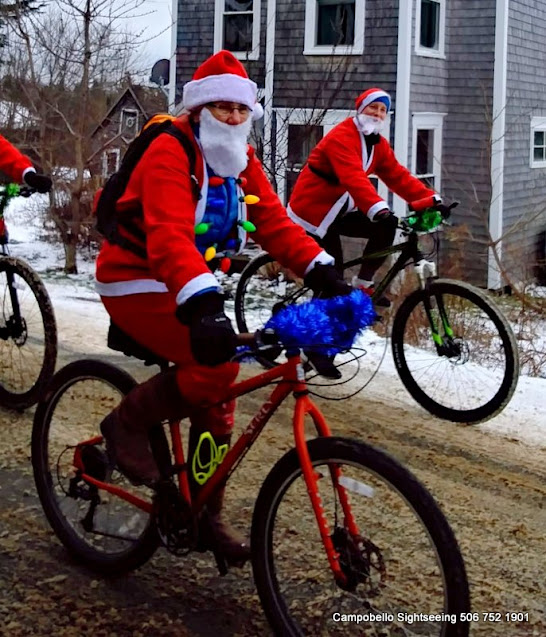 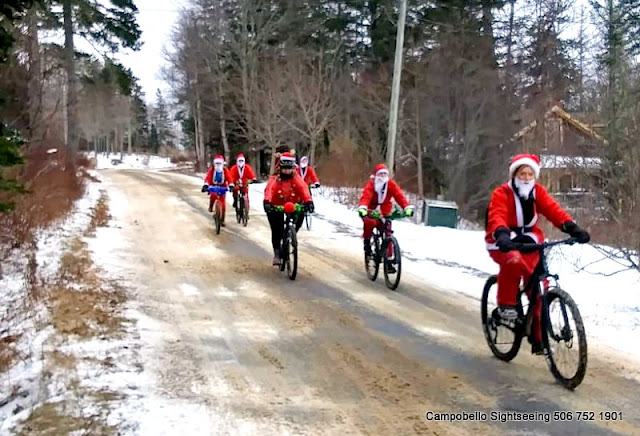 We were lucky enough that we met a whole group of biking Santa-helpers coming along here. So, of course, we now know how Santa is getting the job done.

Just be on the look-out and you might see some as well.