At the Gulf of Mexico


Lets get back to the year 2006. When we had visited the Big Bend National Park we were bound for the Texas Coast with Mustang and South Padre Island.

After a weeklong drive through dry desert we now look upon the deep blue surface of Laguna Madre south of Corpus Christi. 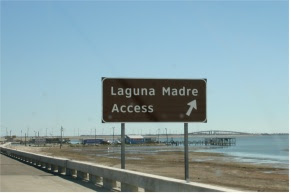 "Corpus", as the city is called by the locals, is the 10th biggest harbor in the U.S..
After crossing the bridge which leads over to the Barrier Islands, traffic decreases. A relatively narrow Island road brings us up to Port Aransas. The history of Port A. is that of a local port of fishery. That and some cattle were the main sources of income until Tourism got a hold of the island. Now Real Estate prices have risen to heaven and the town lives of the many visitors coming for recreation. Marinas and Rv-Resorts are filled up, even now off season. Restaurants and souvenir stores make out the majority of business establishments. Many ornithologists come here to watch for migrating birds to and from Mexico. 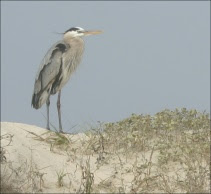 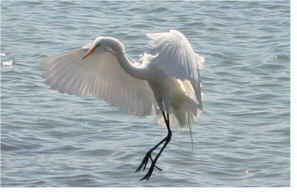 We watch for a place to stay when arriving town. After som back and forth we are told about some free camping on the county beach. 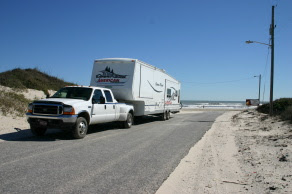 But this information we received at the Chamber of Commerce proves to be wrong. They charge $10.00/night for literally no service. But we decide to stay for 3 nights to get some time looking for alternatives. Apparently neither the town nor the County is prepared for long term visitors, as they do not offer any rebate. Only the hook-up site at $18.00/night offers a weekly rate of $110.00. way too much if you want to stay 2 months. Well, at least it is pretty easy to park the trailer here. The beach is wide and has a solid compacted layer of sand. Many other RV's are using the beach for a short term stay.


On the 3. day we drive off to explore other places. There is a number of access roads between mile marker 27 and 34 where one can camp for 3 days without paying a daily charge. However the users have to purchase a $12.00 sticker, good for a year. However this is of no use for us, since we do not want to move our rig again after 3 days. So we drive down south on Padre Island where there is a National Seashore. 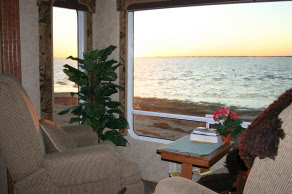 This place is offering two categories of camping. One may either use the official dry camping site above the beach for $8.00/night or a free beach camping on the North Beach, South Beach or Bird-Island-Basin (bay-side). Both places have a time limit of 14 days camping. For Bird-Island-Basin one would have to pay a user fee of either $5.00/day or a one-year valid pass of 10.00. So there is nothing entirely for free. On the North Beach, as well as on the South Beach there is a time limit of 2 weeks, then one has to move out for at least 48 hours before returning. A maximum stay of 65 days/year are allowed. All this might change a lot during the coming years as there is a generally increasing demand for camping.  Because of high winds and a similar high tide we decided to camp on the bay-side at bird-basin. We obtained the free camping permit, pay the one-time user fee and were lucky enough to get rigged up before there comes a whole bunch of more RV's looking for the same. Our big rear window is pointing right towards the lagoon and the sunset

Contrary to Holtville we've got a lot of weather here. Our first storm hit us from the north (probably a canadian) and it comes out of a sudden I'd not believe being possible. We are sitting at our dinner and suddenly the wind starts howling, shaking the trailer so violently that we get really scared.
With solar panels out and against the wind the noise is unbearable. And it is DARK, when it happens. I get out and hitch on the trailer. That smoothens the rocking a bit. Then we haul in the bedroom slide, because you just can't sleep there with it being out. During the night it rocks and clatters all around but towards morning it calms down a bit.


Padre Island National Seashore encompasses 133,000 acres of America's vanishing barrier islands. It is the longest remaining undeveloped barrier island in the world. White sand beaches, interior grasslands, ephemeral ponds and the Laguna Madre provide habitat for a wide variety of flora and fauna. The seashore receives an average of 800,000 visitors per year. The majority of the visitors are from the regional area.