Another Flu Restriction At The International Border

This morning I was coming through the International Border back onto the island. I had gassed up and stopped by the local IGA to get some milk and a yummy ice creme. When it was my turn to roll up to the little customs window, the friendly officer informed me (I think she was sorry about it) that due to the Avian Flu virus, it was now prohibited to take raw chicken or eggs across the border. 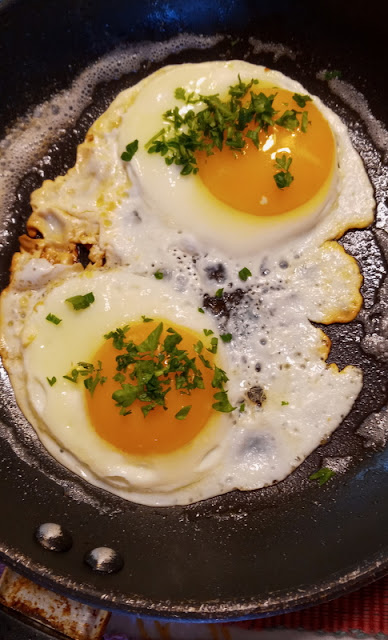 I almost got a laughing fit right there. Doesn't the Canadian government know that the Avian Flu is spread by birds - living flying birds - that is!?!?

I guess Canada Customs agents will now have to spread in close formation along a 5500km long (the longest in the world) international border to shoot down crossing migrating birds, after all, anyone of these could carry the Avian Flu virus and infect poor Canadian birds with it. And btw. the Avian Flu is already in Canada. In Nova Scotia lots of dead birds have been found.

Mr. Trudeau, it is too late. We might as well eat American chickens and eggs. And when it comes to me, I prefer both cooked or fried, never eat them raw.

Likewise, it is outright stupid that Canada still requires travelers to fill out an app, called ARRIVECAN, where vaccination certificates need to be uploaded. What about showing the actual paper certificate at the border? Thousands of seniors are already having difficulties with downloads and uploads and the whole damn digital rigamarole. Customs agents have already voiced their concern that car line-ups this summer will be of epic proportions. I have already personally been waiting behind of foreign licensed cars at the border watching the minute hand go round and round and round. And quite a few of those hopeful travelers had been turned around. Just imagine, that happening hundreds of times every day. Oh what fun!

According to the government, ARRIVECAN will never go away. The reason being that the government has spent 100Mill tax dollars on an idiotic app which btw. came in way too late during the pandemic and is now utterly obsolete. But admitting to having spent that kind of money for some BS-app must be hard for the government as they fear backlash for wasteful spending from the opposition.

Meanwhile, we must hope that chicken and eggs will not be sold out in the local island store. If such fatal thing should happen you ought to know that both products found in grocery shelfs on the Canadian mainland cannot be brought through the US, as the US government has copycated (is that a word?) the Canadians, and prohibited even the transfer of such delicacies through the home land. The last open way to locate chicken and eggs would then be the Deer Island - Campobello ferry. Alas, come June, our wonderful ferry connection will cease to commute back and force for at least 2 weeks, mainly because the company operating the ferry prefers to do their yearly maintence in June while tourists are tripping back and forth waiting impatiently for the opportunity to visit Campobello island, instead of during May when traffic is low. That being said, you know what the implications are: No chicken nor eggs will reach the island during the down time of the ferry.

I have seen some green herbs, like chives and parsil, coming up in our garden. They give me hope. I will try to make a soup of them. I still have some salt and pepper.