Temperatures have been dropping fast. Ever since the middle of October we have had very strong winds, and doesn't seem to be letting up.
But as dog owners we have this obligation to take Dixie out every day. You can imgaine that a young 76-pound dog will start to bounbce off teh walls, developing destructive behavior if it doesn't get enough exercise. So we get a lot of that exercise as well. In fact, I have never been walking so much in my entire life. So much and on a regular basis. But we feel rewarded by Dixie developing into a real quiet and content dog.

On Campobello Island we have miles and miles of hiking trails. They can mostly be found in the two parks, the Roosevelt Campobello International park and the Herring Cove Provincial Park. Together they have in excess of 4000 acres of forested area. 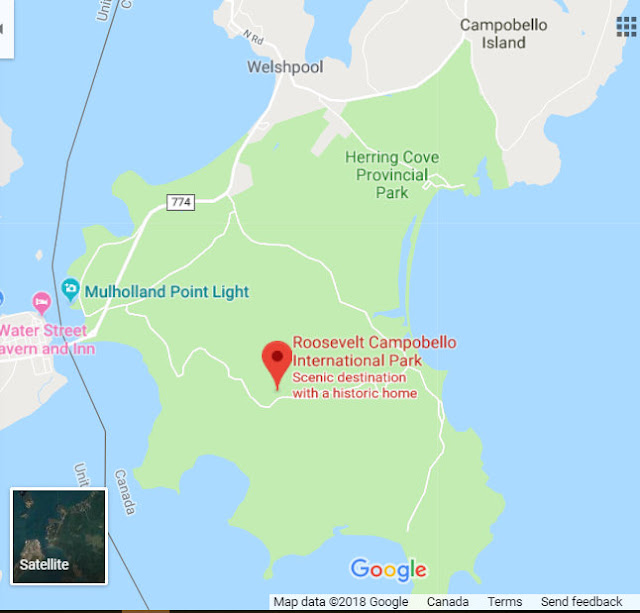 The Provincial Park is closest to our home and not even 2km to drive to. So twice a day we load Dixie into the dog-mobile (aka: former ambulance) and off we go on another hike. Of course, with all that wind, trees are now bare of all leaves. But that is OK, the forest is now less dark and sunlight filters through the trees, converting mossy grounds into a fairy-like landscape. 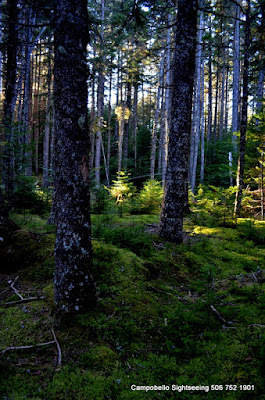 It really reminds of my imagination I had when I was a child. I have always been glad in the woods. And now, I feel my batteries being recharged every time. We let Dixie run off-leash. With tourists gone, other hikers are now extremely rare. 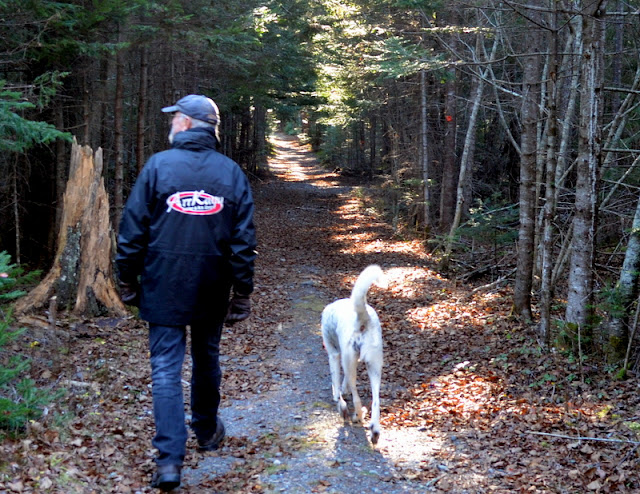 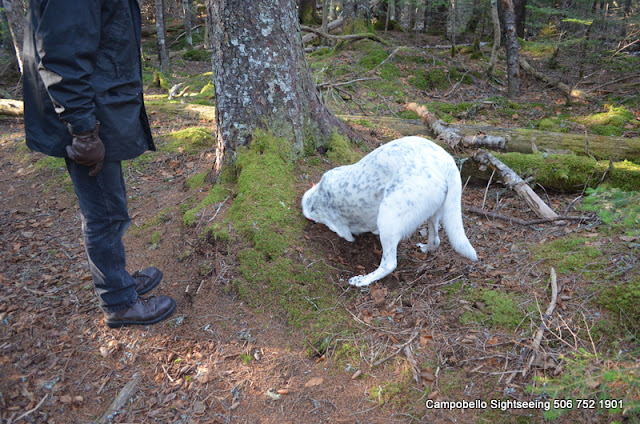 Dixie digging out a mouse?

Dixie is a really good girl and mostly stays in sight of us. She is not a hunting dog, but would protect us from any suspicious occurrence along the trail. The other day we were crossing a tiny stream when she saw a ball of foam down below the bridge. It was water foam. See following explanation:

What causes foam to appear on rivers, lakes and streams?

As with most liquids, water molecules are normally attracted to each other. This attraction creates tension at the surface of the water, often referred to as a thin "skin," which allows some insects to glide across it.

When leaves, twigs or other organic substances fall into water and begin decaying, they release compounds known as surfacants.
This interaction breaks the surface tension, which in turn allows air to more easily mix with water and creates bubbles. These bubbles congregate as natural foam.
However, not all foam is natural. Certain man-made products, including detergents, can cause foam that is similar in appearance, but may be harmful to fish and other aquatic life.

Seeing that white foam ball Dixie is jumping from one side of the creek to the other growling at it. It was just too funny to watch. 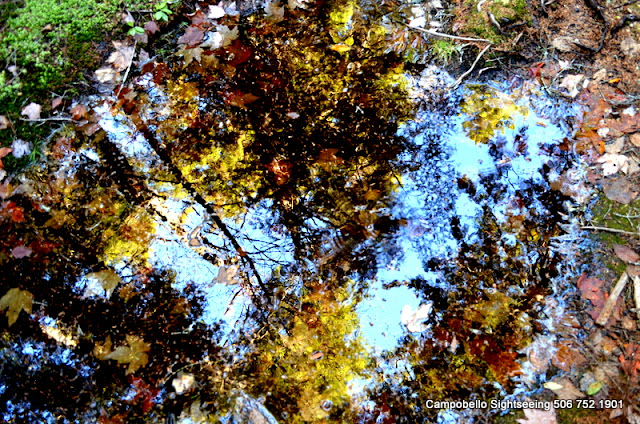 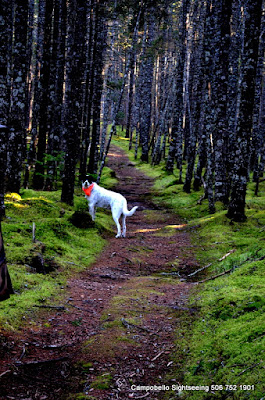 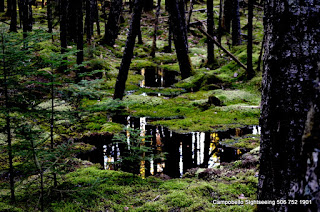 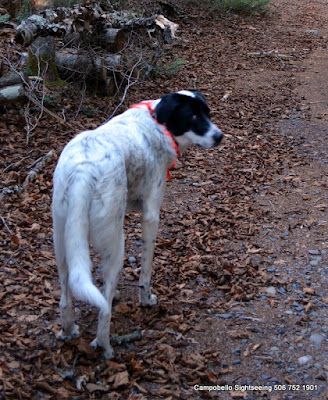 Today's walk led us down a narrow trail where we discovered two old man-made water ponds. An old fence line separating them from the trail. We wondered why they were built and what the purpose might have been, far from any habitation. 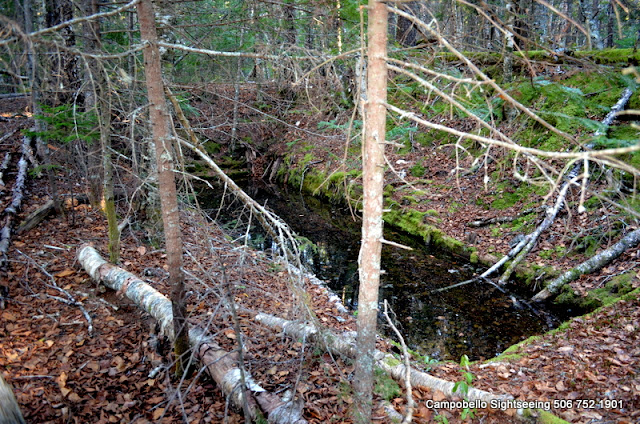 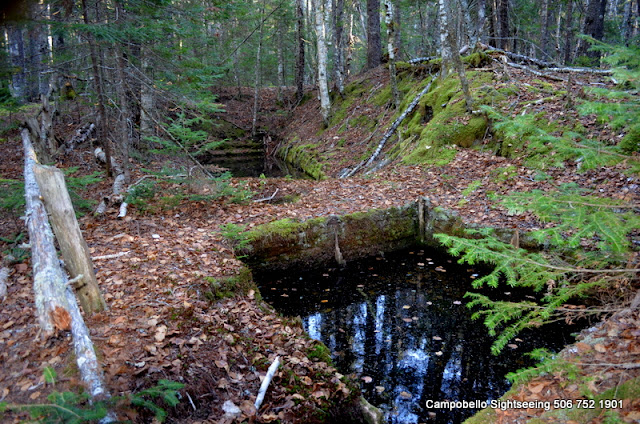 They were too small for being fish ponds. There was no surface water inlet, but we did see an old grown-over outlet.

We do know that ice blocks were produced in some areas on the island. Ice blocks were used in ice-houses which served as fridges over the summer. One of these ice houses still exist in the Roosevelt Park. Could these small ponds have been used for cutting ice? The area is full of history and hidden away secrets. 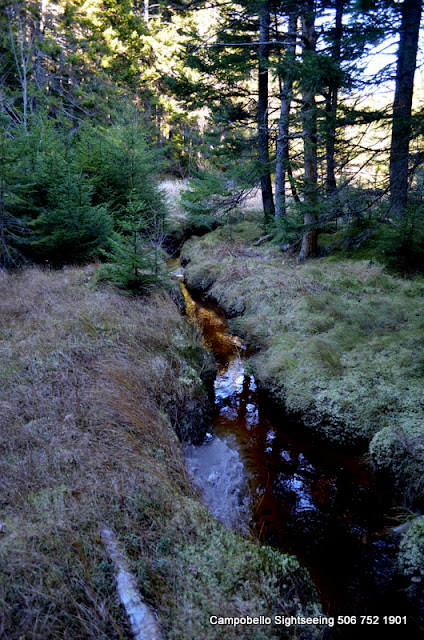 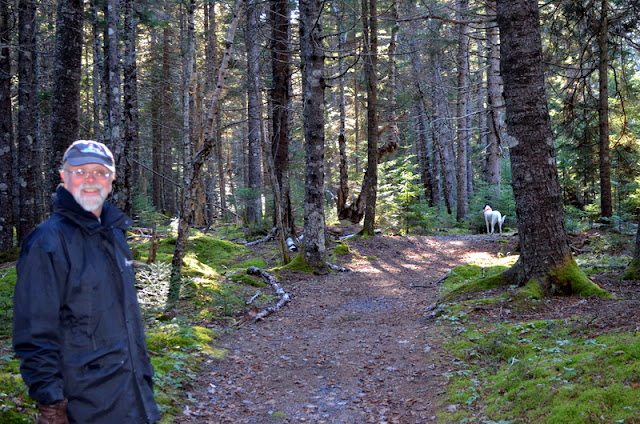 Today's hike took a little more than one hour. It is satisfying to see Dixie resting afterwards. While she fell asleep we enjoyed a piece of my home-made Black Forest Cake. And that's how we spent Veteran's Day. 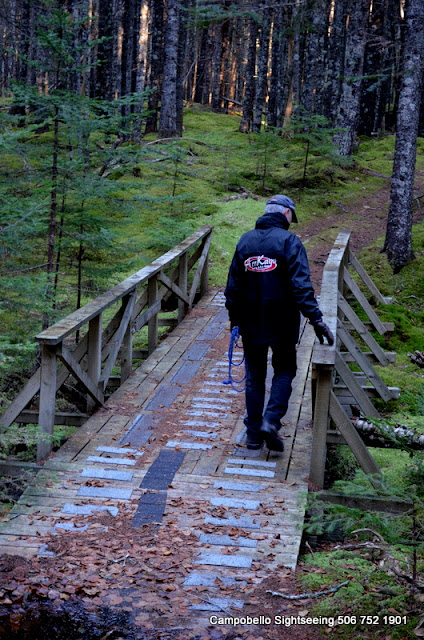