This morning ran up with a deep blue sky and lots of sunshine. We were busy readying our rig for departure. Last evenings meal in the SANTIAGO Restaurant at Bisbee together with Chuck, LeaRay (from Minnesota) and Fred and Olivia (from Texas) was a wonderful way to end the stay on the SILVERADO Ranch. Now we had to say Good Bye to our new friends and I have the strong feeling we’re gonna see them again some day. But we also had to say Good Bye to Belle. We sat down with her in her kitchen and, as always, she was talking about her plans, but also thanking us for the work we’d done for her on the ranch.

We hit the road and were heading down the AZ Hwy 80 towards Douglas. From Douglas the road follows the border line before it veers off to the North-East. This morning we had beautiful clear colours and we marveled about the wide plains and rugged mountains along the way.
At about noon we reached the I-10 west of Lordsburg. Had some lunch before we went down the ramp and joined the big traffic heading east.


At Lordsburg we took off towards Silver City. Our goal was the Gila Cliff Dwellings. At Silver City we stopped to find about about campgrounds along the way to the dwellings. It was then that Bea found the warning, some good campers had posted, about going up route 15 from Silver City. A narrow road and switchbacks would make that road very difficult for maneuvering large vehicles. In fact the warning was intended for all vehicle beyond 20 length!! Boy, were we lucky to read that before it was too late. The recommended route was to follow Hwy 35 which forks off the 152 east of Silver City.  And that was what we did. Now, the landscape became really hilly and the various shades of green were just amazing. Spring was just around the corner and some trees had started to bring out their light green leaves. We stopped at the huge Santa Rita Mine which supposedly is the oldest working mine in North America. It is probably also the biggest as it stretches over 1 mile across.

As we got past the last little villages entering the Gila National Forest, the road became more narrow. It was very, very curvy and the max speed was posted between 20-30 mph. Huge pine trees on both sides marked the end of a desert landscape. I  was looking forward to a complete change. When you have seen nothing but desert for more then 5 months you’d be delighted to see some green trees. In between the trees high cliffs of a pink colour showed. Beautiful ranches were tucked in very scenic spots.  The road from Silver City climbs up into very high elevation. One sign we saw posted more than 6300 feet, and we were still climbing. 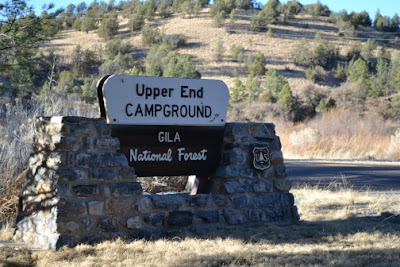 Our Campground in the Gila National Forest


Shortly before approaching the intersection between the 35 and the 15 we got to Lake Roberts. The first campground we saw was the “Upper End” . We stopped on the road and I walked in to check out availablility. I found a very nice and level site long enough for the Motorhome with the trailer. We backed in and booked up for a 4 days stay. This is a weather protected spot, shielded by hills on either side adorned with tall pine trees. 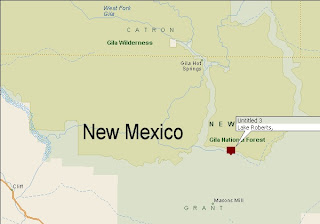 After coffee and a doughnut (!!) we wandered off into the sunset to explore the area. The path led us down and along the lakeshore. Plenty of  little ducks on the water and a quiete little boat with two anglers drifting around the lake. Stunningly beautiful spot!!  Of course being in such a remote spot we had no internet or phone connection, but as the nice host lady said: You are on vacation, just enjoy it here!