New Experiences On "The Big Island".

I don't know why I woke up that early, as it was still pitch dark, but I tiptoed out of the bedroom, carefully avoiding Bea to wake up. Dixie raised her head in sheer bewilderment (what the heck are you doing here?) when I entered her quarters. Got some coffee going and started using the excellent WIFI here. But then Dixie wanted to go out. So I "knipsed" on the outside light and took a short "Business walk" with her.

The plan for the day was 2-parts. First I had to go to the service NB office to finally get an NB license plate on the trailer. When I re-emerged from the office 40 minutes later I left over 2000 Bucks on their card machine. 10% PST (I had paid 5% on the trailer value earlier at the border) and the annual reg. fee. You gotta love it, right? Next stop was to get a SIM card for a Canadian cell phone. On Campo we use US cellphones as they have better reception there.

But then part 2 started. We followed Rte 776 to the south end of Grand Manan. It turned out to be spectacular. 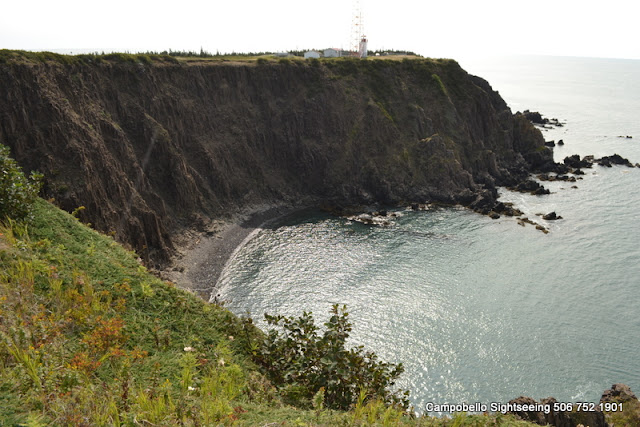 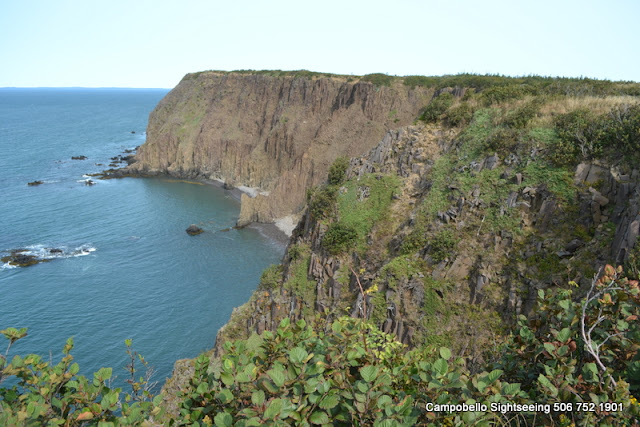 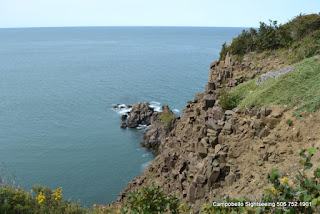 Just standing on top of about 300ft high rugged cliffs gazing across the endless waters of the ocean was worth every cent we had spent to get here. Indeed it brought back feelings from the rim of the Grand Canyon. The basalt rock face cascading into the depth of the sea combine a rugged beauty with a certain brutality. Ocean waves are attacking the bottom of the cliffs in an attempt to destroy the rocks, and, over the course of time, might even have a certain success with it. Down below we can see some small sandy beaches in coves where no humans ever put their feet. 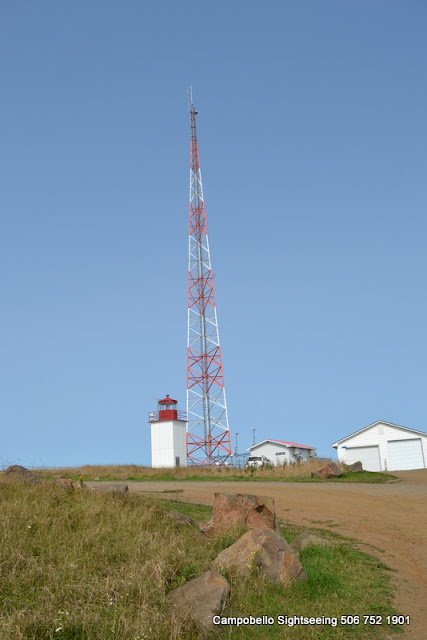 Up here stands the Southwest Head Light, a beacon for approaching ships from the south. Far across to the west we make out the coast of Maine and, using our binoculars, we can make out the lighthouse on Machias Seal Island, or MSI as it is also called. MSI is in an international grey zone. While Canada owns the light and has a lightkeeper on site to maintain sovereignty, the US still claims to own the island. The importance of it being the rich fishing grounds around the island. So far both nations have been sending fishing vessels into the area. Otherwise the island is known for the puffin colony. Puffin Tours to MSI can be booked both from Grand Manan and the Maine side.

After our walk around the area we just sat in the van lunching on our sandwiches and having coffee from the thermos. 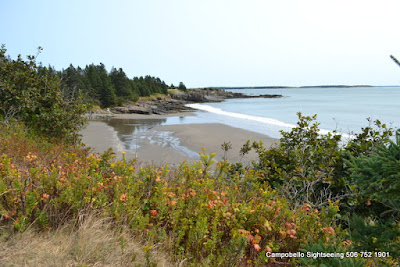 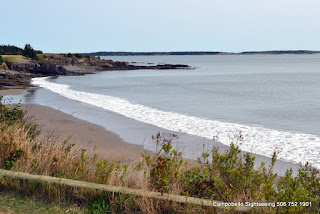 Touring back north, we stopped in Seal Cove to take a picture of the two beautiful white churches, then went down to see the village harbour which seems to be a busy place. 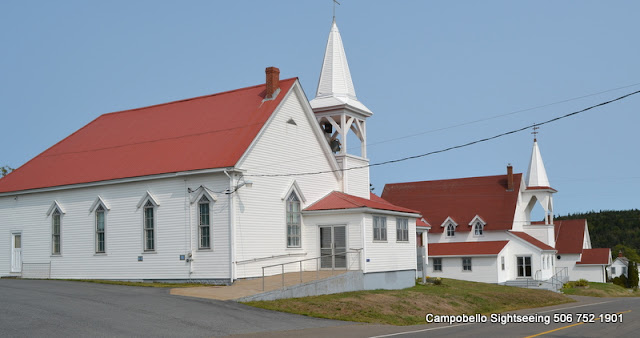 At least the parking area was full of cars and pickup trucks. The much smaller old harbour, however, has more to offer for the photographer looking for scenic spots. 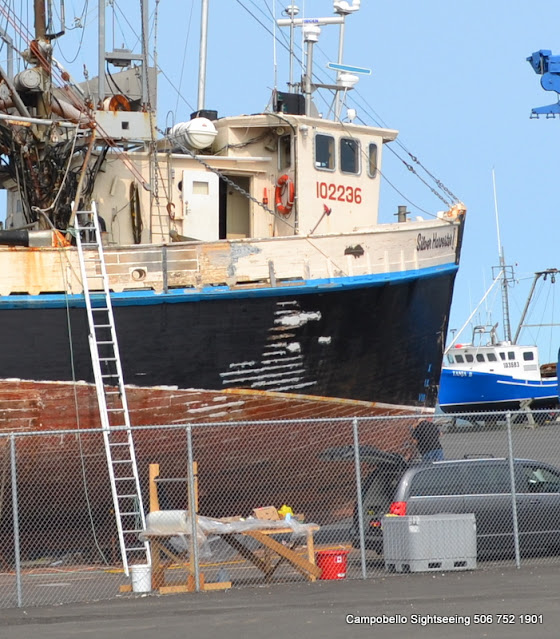 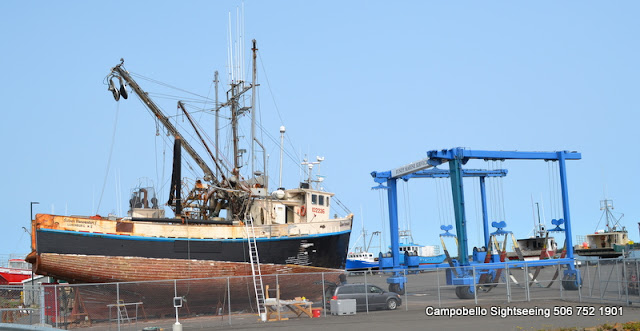 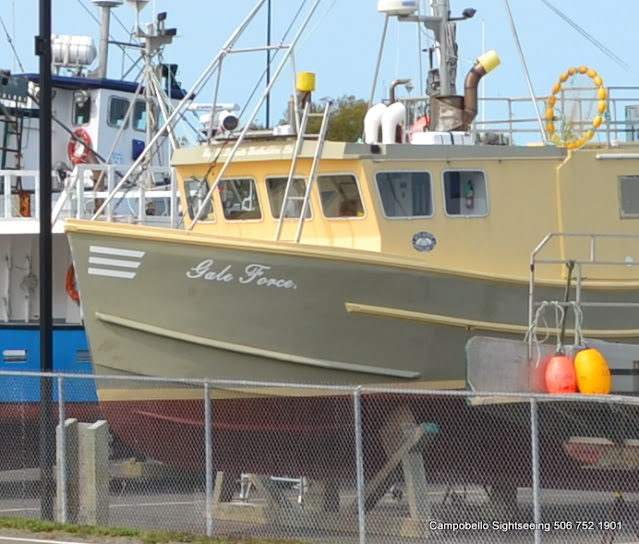 Next stop was at Ingall's Head from where one can take a ferry over to White Head Island. And yes, there are people living there as well.

Along the road we found a big area with fishing vessels set up like in a giant parking lot on land. It is the Fundy Marine Service Center. They have giant movable cranes able to lift any fishing boat and move it to its parking spot. Boats are here for repairs, general service and upgrades.

If you are into bird-watching you might want to try visiting Castalia Beach and Marsh. A beautiful area especially for those like Bea who just cannot get enough pics of birds. 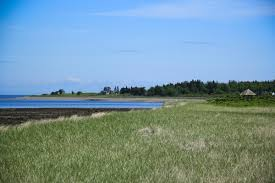 Returning to camp we were both feeling a bit overwhelmed, but nothing a coffee and a few cookies couldn't fix.