Hey, We Are Off For An Adventure!

After 11 years, we finally made it come true. We are on a roll, quite literally. Take-off was at 8:30 with first border-crossing a few minutes later. 1 hour after travelling along Rte 1 Maine and the second border-crossing back into Canada, we were heading up Trans Canada Hwy 1. Our ferry was booked for 1:30pm from Blacks Harbour. We arrived there early and were getting ready for a longer wait when the ferry pulled in for an earlier departure. Surprisingly we were invited to board at this early departure. After getting squeezed in between a couple of cars and a semi truck we walked to the upper decks to get some views. Dixie had a comfy bed in the van and seemed quite content to take her usual morning nap. 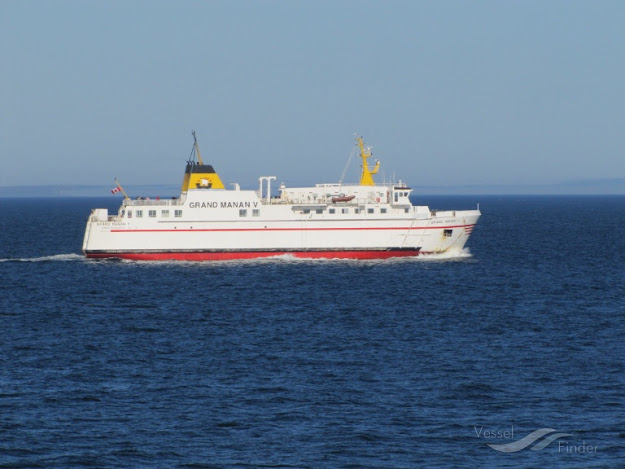 The Grand Manan ferries are operated by Coastal Transport and they run a restaurant on board which actually has some good meal choices.

Soon, we were seeing the Archipelago of the “Wolves” on the port side. Well, I was seeing that, while Bea had established herself with her NIKON P900 on the other side looking for rare sea birds. Those are birds which you will never see close to land and shorelines.

It takes 90 minutes to travel from Blacks Harbour to the island of Grand Manan. (Pronounced: Menaan) Then the really steep high cliffs of the island appeared on starboard. Landing point is at North Head and our destinations for the next 3 nights was “The Anchorage” Prov. Park, which quite a few miles south of North Head.

The Campground is one of the most beautiful we have ever been on. Since the park isn’t busy this time of the year, we got to choose the site we liked best. 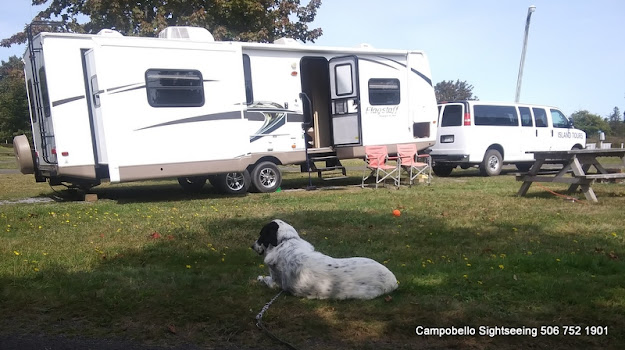 A meadow with some beautiful trees where you can find some shade on a warm sunny day.  And today we were lucky enough with the weather. In spite of it already was  September 14 it was incredibly warm and wonderful. Soon we were having coffee and a few cookies outdoors, admiring the views around. After coffee I suggested a hike along the water’s edge. We walked a little more than a mile each way and loved the gorgeous views across the water. 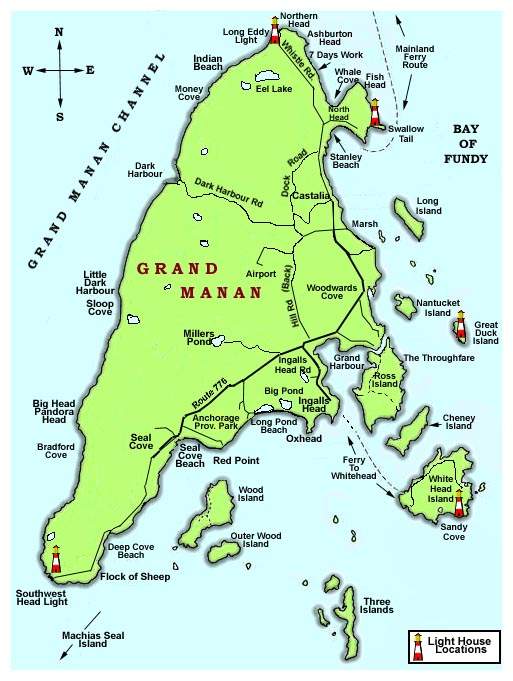 Grand Manan is a much larger island than Campobello. It’s about 35km long and a little farther south, in front of the coast of Maine. In fact we could see the water tower and church spire of Lubec,ME when approaching the island, with Campobello just a little north of it.

Not only is Grand Manan quite a bit bigger than Campobello but it also has a much larger population of about 2000 residents. There are several villages along the east side of the island. The west side is not populated as it has high cliffs 300ft high right off the water.

Tomorrow we will be driving around a bit to see more of the island.