A Long Day In Grey

You know the feeling when you gotta go somewhere the next day? You know you gotta start early so maybe you go to bed earlier than usual. But then you have difficulties to sleep, you start looking at your watch -- or try to, but it is too dark to see anything. So toss and turn until you finally get up, make a coffee and ponder what the hell you are doing that early anyway.

About that happened to me last night. We had a ferry departure coming up at 9:30am, and had to ready the trailer, including a visit to the dump station then drive half the length of the island to get to the ferry terminal.

Of course we were the first vehicle to arrive there with 90minutes to spare until departure, mind you you gotta be there 45 minutes prior to ferry departure. 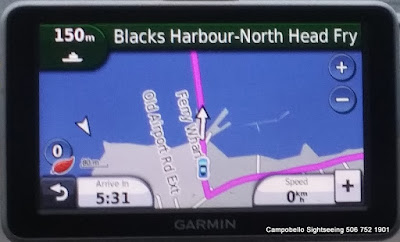 But finally we rolled aboard and got squeezed in just as last time between a semi and cars. 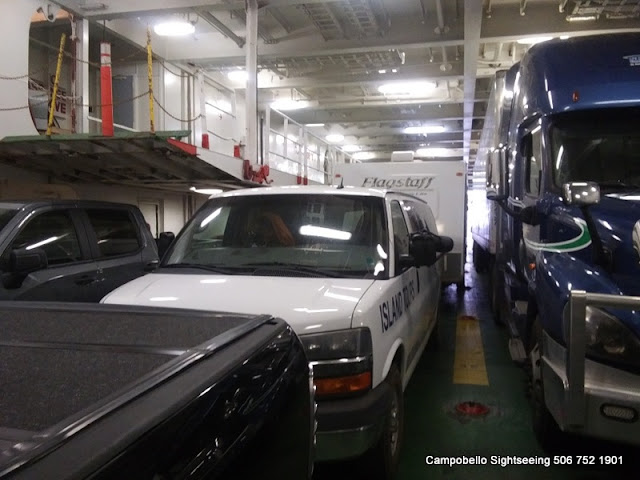 This time I took a picture. The ferry crew is doing an amazing job with getting you parked without you scratching your rig.

Today was a really grey day with a thick layer of clouds making for a dull daylight. Once we reached the mainland it also rained a bit. We got onto the Trans-Canada Highway #1 and passed St.John right after having lunch in a turn-out.

Driving along on a major highway under dark clouds and with water spraying onto your front windshield, is one of the least enjoyable things to do for me. I'm getting tired just by looking ahead on the asphalt and steadily having to use the window washer.

It was mid-afternoon when we reached the northern fringe of New Brunswick, ready to enter the 13km long Confederation Bridge carrying the Trans-Canada Highway across the Abegweit Passage of the Northumberland Strait, linking the province of Prince Edward Island with the province New Brunswick on the mainland.

On the PEI-side they had set up a checkpoint for Covid-19. I showed them our print-out with the application to enter the province and our 2 drivers licenses. It took just a minute and we were released.

As this was my first visit to this smallest of all Canadian provinces, I was amazed to see that the land around me was very similar to Germany's most northern state, Schleswig-Holstein. Agricultural fields with small farms and the typical windbreaks of trees between the fields, making up the picture. Only difference was the colour of the soil, which is iron-red on PEI.

Our destination today was visiting friends of us near Charlottetown. We met them years ago in California, but haven't see them for the last couple of years.

We reached their place after a journey along one of what must be the bumpiest road in the province, and then they told us we could have taken a much better road but it would have been 5km longer.

They received us with a super delicious dinner and we did a lot of catching up.

Dixie amazed us all as she adjusted immediately to the new surroundings and was really friendly with Bob and Karen. She normally takes her own sweet time before she decides to like a stranger. LOL.

So we are somewhat tired tonight and need to find the bed soon.