The excitement could be felt in the house. The dogs had been watching us carefully has if they were afraid that something would change their lives for ever. And that feeling wasn't too much off reality. Of course it had befallen ourselves as we had planned this over at least a year.

Lately, we had been running back and forth from our house and up to where the rig was parked. It was October 2005 and we were ready to break away from a life which to us had become the normal, though most people would probably have quite a few other thoughts of what was "normal".

Afterall, the last change of our lives had just just been 42 months earlier when we had left Norway to live in Canada.

On this day in October, our rig was packed up and ready to go.

I had just stepped outside into the dark October evening to call in our 2 dogs. And there came Boomer, our yellow Labrador, into the shine from the outside lamp. He had something around his mouth which looked like straw, and he was behaving erratically rolling his face on the ground.

Investigating, I saw blood. Oh God, what had happened?

Well, I quickly found out that Boomer had a lot of porcupine quills in his face. We got him into the kitchen and tried our best to pull out the quills, but he behaved like a wild tiger. No chance! So we called the country vet. He promised to help and off we went 40km through the night.

This is the short prelude to how we started our winter-travelling days as snowbirds. 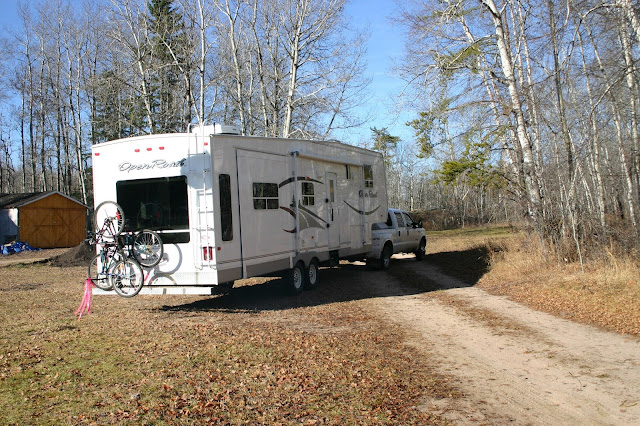 Next morning, with the quills removed, we climbed into the truck and took off for 6 months of adventure. Our route would lead us south via Calgary and the Banff Nat'l.Park into British Columbia, all the way to Vancouver.

From there we would pass into the US riding down I-5.

Before reaching Rogers's Pass, snow was

turning the mountains into a winter-wonder land, and before we even reached Vancouver, the 2. disaster had struck. 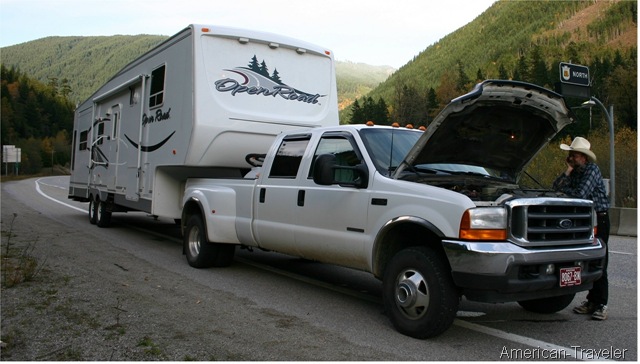 On the Coquihalla summit road the truck transmission went. Pouring oil had left a wet mark on the highway, before I managed to pull the rig over onto a narrow turn-out.

That, and the following harrowing experience with the tow truck racing down the 8% slope towards the town of Hope, narrowly missing a major collision with our 5t fiver behind, will for ever stay etched into our memories.

A 2. tow-truck right behind us, brought our truck down to Hope. Now, the name of the town is really appropriate as countless transmissions have been blown on this highway, and as the shop owner explained to us, we realized that we'd been the lucky ones as other trucks had burned on the highway when hot transmission oil had hit the likewise hot exhaust pipe.

We spent 3 days in a campground and were relegated to walking, instead of driving around. 5000 Dollars later we were back on track towards Vancouver.

We entered the US on October 22.

The journey down the west coast was, and still is, the most beautiful we have ever done. Our first stop in Washington State was at Lake KI Campground where we stayed a couple of days to explore the outer coast.

But more of that at a later posting.