Words Of Wisdom Or Is It Despair?

It is too late for gun control in America: Neil Macdonald 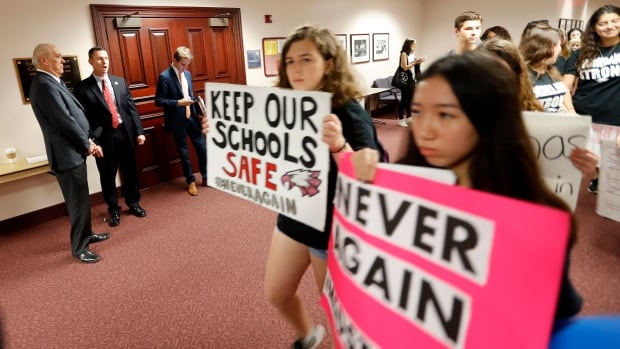 The teen activists today are probably too young to remember the awful despair of the Sandy Hook families — who pushed for, yet failed to see change — but they should prepare to experience it themselves. Because they will. (Gerald Herbert/Associated Press)

As America's attention span wanes, and the clock ticks down to the next school shooting massacre, it's almost poignant to watch the abruptly politicized teenagers, burning as righteously as young people do when they coalesce around a noble cause, hectoring important politicians, making them squirm on television, clearly believing that they shall overcome.

But they shall not overcome. These lambs may not be silent, but they are battering an insuperable wall of legal and political iron.

Yes, yes, their president has convened a few televised group encounters with survivors, clutching a sheet of talking points that included the numbingly banal "I hear you," but there's a chasm between hearing someone and actually listening, and the men and women who run America are actually just pacifying, knowing the uproar will end. 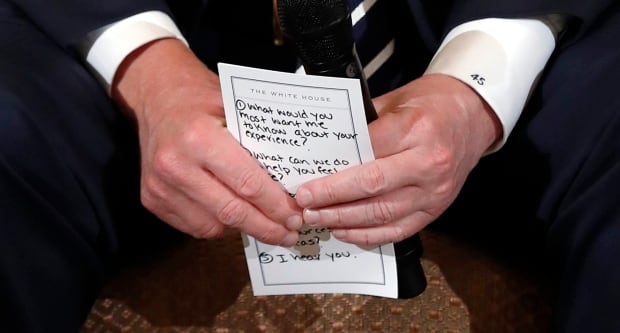 The youth protests are quite understandable: these are kids who grew up being told they have an absolute right to protection from words that offend them, let alone mass murderers carrying weapons designed to kill soldiers in war.

In fact, though, the bedrock law of their country guarantees both things: the right to offensive speech and the right to own and carry battlefield weapons in public.

These youth have also been misled, especially since the 9/11 attacks, into believing that the most sacred duty of their president is to protect American lives, when in fact their president has no intention of protecting theirs. He will do nothing to prevent the next murderer from picking up an AR-15 and setting out for some school to see if he can break the previous shooter's record.

This is not opinion. It is the only possible conclusion.

Americans have created facts on the ground that have become immovable objects, and it is on them that the efforts of the teen activists will crash and break.

There are three principal ones:

The Second Amendment of the U.S. Constitution states the following: A well regulated militia being necessary to the security of a free state, the right of the people to keep and bear arms shall not be infringed.

That sentence was ratified in 1791, a time of flintlocks, and liberals have argued it cannot possibly translate into allowing the citizens of a largely urban America to lug around high-efficiency military killing instruments in 2018.

But the only voices that really matter belong to the judges of the Supreme Court, and they have ruled, recently and repeatedly, that that is precisely what the 227-year-old phrase means.

In the 2008 Heller decision, the court swept away the District of Columbia's efforts to regulate rifles and shotguns and ban the possession of handguns in private homes. It ruled that the Second Amendment literally confers the right to carry a weapon. Period.

In McDonald v. Chicago, two years later, the court confirmed that subnational governments have no power to restrict the Second Amendment.

And in Caetano v. Massachusetts, two years ago, the court further declared that the Second Amendment applies "to all instruments that constitute bearable arms, even those that were not in existence at the time of the founding (of the nation)."

In other words, Americans can bear whatever modern ordnance they can carry, from sniper rifles to hand-cannon pistols to the weapon of choice for mass murderers, the AR-15.

America's gun enthusiasts are represented by the National Rifle Association, which lavishly rewards and savagely punishes politicians, and which believes its members' right to target practice supersedes government's obligation to protect life.

The NRA preaches that the best answer to a bad guy with a gun is a good guy with a gun, a catchy but patently stupid slogan that often fails, just as it did in Florida, where an armed deputy, presumably a good guy, was stationed at Marjory Stoneman Douglas High School. He remained outside, in a defensive position, as Nikolas Cruz, his AR-15 blazing, murdered his way through the school hallways.

The most severe test of NRA power was actually in 2012, after mass murderer Adam Lanza, AR-15 in hand, killed 20 schoolchildren and six adults at Sandy Hook Elementary School in Connecticut. 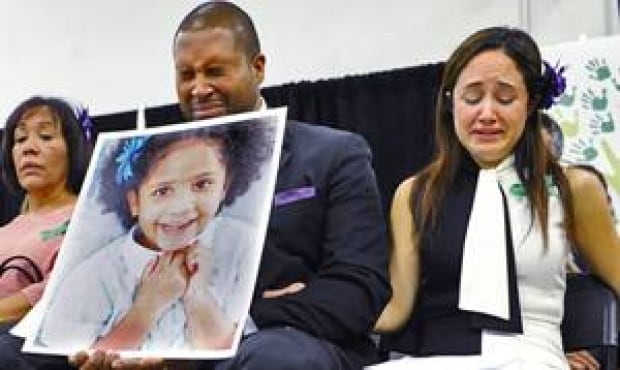 After the Sandy Hook shooting, grieving families arrived in Washington to show pictures of their dead children to discomfited politicians (Jessica Hill/Associated Press )

I spoke with them, and I remember their desolation, and how they grasped desperately at the possibility their tragedy might effect change. With naïve confirmation bias, journalists encouraged them, writing that this was the tipping point.

And then nothing tipped. The NRA shrugged it off. A ban on assault weapons was voted down by a huge margin in Congress, and a subsequent set of much milder measures fell four votes short in the Senate. Because four Democrats — Democrats — voted against.

"I do not see a path for my support," declared North Dakota Democrat Heidi Heitkamp. No other explanation was really needed.

There are more than 300 million guns in America. They aren't butter; they don't perish, or come with a best-before date.

And what might happen if politicians and the courts ever actually do gather up the nerve to reduce the national arsenal?

Look to the origins of the Second Amendment. As the federal court of appeals in D.C. has ruled, Americans have the right to bear arms in self-defence, which it defined as "resistance to either private lawlessness or the depredations of a tyrannical government (or a threat from abroad)."

Think about that one. Americans have the right to amass an arsenal to defend themselves against their own government, if it becomes tyrannical.

And anyone who doubts that millions would regard any effort to take their guns away as the depredations of a tyrannical government need only consult the essays regularly carried on the NRA website.

It would be civil war.

It is too late for gun control in America.

And the sudden surge of conservative concern about mental health, as though all mass murderers are mentally ill, is purest hypocrisy.

Well, it exists, all right. And America has provided it with a target-rich environment.

The teen activists today are probably too young to remember the awful despair of the Sandy Hook families, but they should prepare to experience it themselves.

Because they will.
Compiled by: Peter at 8:30 AM