It was one of those days where I wished I had stayed in bed. And it was Friday as well, though not the 13th.
I had been dispatched on a run up north and was back with 12 passengers who all were eager to get to the big city, where one or the other business was waiting for them.
We were happily crusin’ down the highway when suddenly I felt a significant loss of power in my MCI coach. In fact I noticed we were just merely coasting with no motor power whatsoever.
Realizing something was very wrong I steered the bus onto a rather narrow shoulder where it rolled another few meters before it stopped entirely. 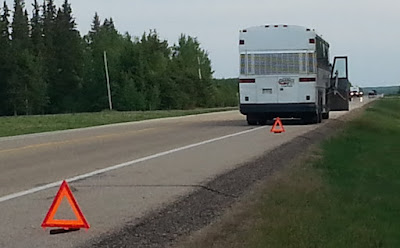 Any further attempt to re-start the engine was answered with an eerie quite. Flipping on my hazard lights didn’t bring any reaction either.


We had broken down with absolutely no electric power. Checking head lights I was greeted with the faintest glow. I remembered that I had been in a similar situation many years ago with an older motor home we owned at the time. Most likely our alternator had quit working.
Now, it was pure luck that we had cell phone reception, which, in these northern wilderness parts can be tricky at times. I managed to alert the company from where we were promised help would arrive in three ways: A tow truck would be dispatched, a company bus would be starting on the 2hr.-run from the city and another (school)bus would be dispatched from the other direction up north.
So, the race for rescuing us was on.

It turned out to be the race of snails. Time was ticking by, and my cell phone would ring every so often to inform us about rescue progress.

I had to do something to keep my passengers happy so I told them a story. It was the story of a hiker in the wilderness who got to a river he had to cross. Without any fort or bridge in sight, he started to search upriver for a way to get across. Pretty soon he found an Indian sitting by a fire boiling water for coffee. Down by the river he had a canoe.
So the hiker, who is from a big city in the south, asks the Indian whether he would get him across the river in his canoe.

The Indian says sure, but is just about pouring himself a coffee. The hiker sits down on a tree stump and waits. After the longest time and many coffee cups later the hiker gets to his feet asking whether the Indian could now get down to business and get him across the river. “Soon” is the Indian’s answer, as he lights up a cigarette. Hiker sits down again. A few cigarettes later the hiker is making another attempt of getting the Indian to ferry him across the water. But now some impatience has sneaked into his voice, so the Indian notices.

When the Indian finally turns around he says to the hiker: “If you are in such a hurry, why didn’t you come yesterday?”

Yes, why didn’t I drive the day before? Or the next day?
After 3 hrs. a school bus and the tow truck, a huge semi, arrived from the north at the same time. Meanwhile, the other bus coming from the south had received order to turn back to the city.

We all arrived Edmonton very, very tired at 11:30pm. 1 gentleman missed his flight, another missed his Greyhound connection out west. But I guess all were happy as can be to get off the road.

And the “Picture of the Day”:

REDNECKS IN TOWN
Compiled by: Peter at 9:08 PM