Beachcombing is a way of life for those who live along the shores of Canada's East Coast, which has been battered lately by several ferocious storms and is thus proving exceptionally fertile ground for scavengers.

Ten days or so ago, one New Brunswicker had the find of her life. Dianna Parker, a resident of Campobello Island in the Bay of Fundy, discovered a century-old fishing shed slumped amid the slush and sand of what locals call Fox Farm.

The structure had been part of a collection of historical buildings in nearby Lubec, Me., until a storm surge combined with high tide to rip the shed from its rotted moorings. Wave action helped the building set sail and, remarkably, pushed it clear between the pilings of the Roosevelt Bridge, the border crossing that connects Lubec to Campobello in New Brunswick. The shed came to its final resting spot on Canadian shore, where Ms. Parker discovered it.

What she did next, though, set off an international firestorm that has left relations between tiny Lubec (population 1,300) and even tinier Campobello (population 800) in a condition nearly as poor as the tattered shed.

"I went home and then back with a chainsaw," said Ms. Parker, who is feeling sheepish about the uproar and her role in what has exploded into a local saga. 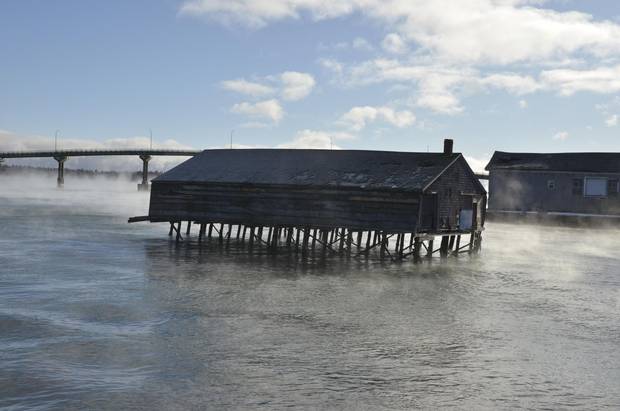 Ms. Parker beachcombs regularly for wood and artifacts she can repurpose in her spare time. (She sometimes goes with her four-year-old granddaughter who believes no beach trek is complete unless she has found sea glass for her pocket.)

"It's totally legal. Look up Canadian salvage laws," Ms. Parker said. "Three days in, I found some really nice boards and they were really long. There were other people filling their trucks." To fit the boards in her small Mitsubishi SUV, Ms. Parker needed to cut them.

She was midway through her process when American volunteers arrived from Lubec Landmarks, the U.S. non-profit group that owns the shed as part of its McCurdy's Smokehouse complex, which is listed on the U.S. National Register of Historic Places.

Arguments on the beach broke out, insults were hurled, the shouting worsened and pictures of licence plates were taken, as were sides, along international lines.

The fracture deepened when Lubec Landmarks' president, 76-year-old Rachel Rubeor, wrote a letter to Maine Senator Angus King blaming "vandals" for taking remains of the shed from the beach. Local media picked up the story and the ensuing reaction on Facebook, where both Lubec and Campobello residents maintain community bulletin boards, has grown sourer by the day.

It is an odd and uncomfortable situation for people, many of whom are dual citizens or have family on both sides of the border and view their community as encompassing both towns regardless of citizenship.

"Geographically speaking, if you look at a map there is an international line. But community-wise, we really are one," Ms. Parker said.

Campobello's only link to the mainland is the bridge to Lubec; to get gas, residents of the island must go to Lubec or through it and back up to St. Stephen, N.B. The same goes for restaurants, banks, doctors, hospitals and police, who come from St. Stephen (via Lubec) if they are called to the island. Locals are so used to crossing the bridge multiple times a day, Ms. Parker said, that many keep their passport in their vehicles. 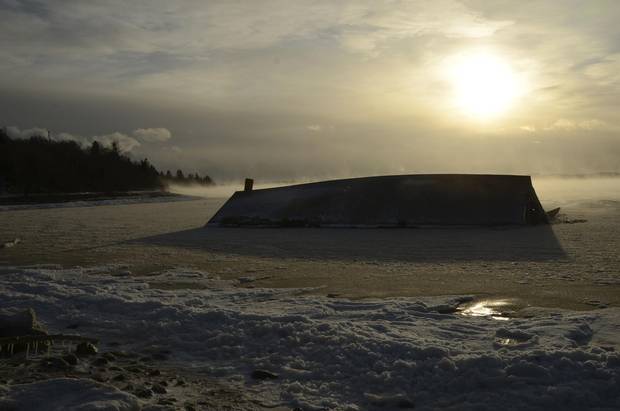 Justin Tinker, a civil engineer who lives on Campobello, said a primary concern on the Canadian side was the danger the shed, which has been deteriorating for years, presented to both the bridge structure and to community fishermen who often fish for lobster and scallops in the dark.

"In the last decade, we have seen this shed lose some of its end supports and start to sag and slump," he said. "I applaud what Rachel Rubeor's group is doing, but that doesn't take away from the fact they've been unsuccessful."

Ms. Rubeor admitted that her group, which relies on grants and private donations, has struggled to raise funds to refurbish the building. Last year, they launched a GoFundMe campaign in hopes of raising $125,000 (U.S.) for the project. But so far, less than $1,500 has been raised.

It is unclear now if any of the shed's remains can be used. 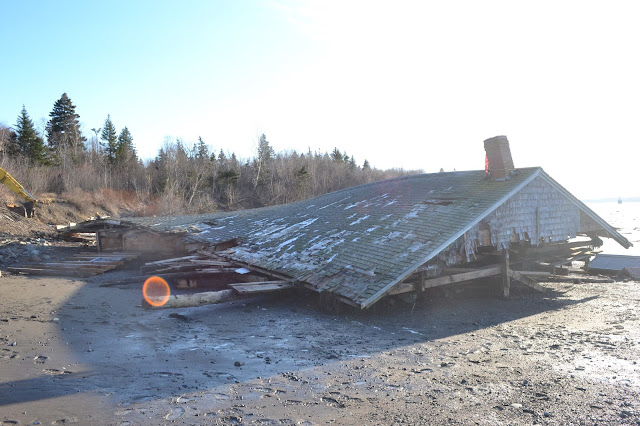 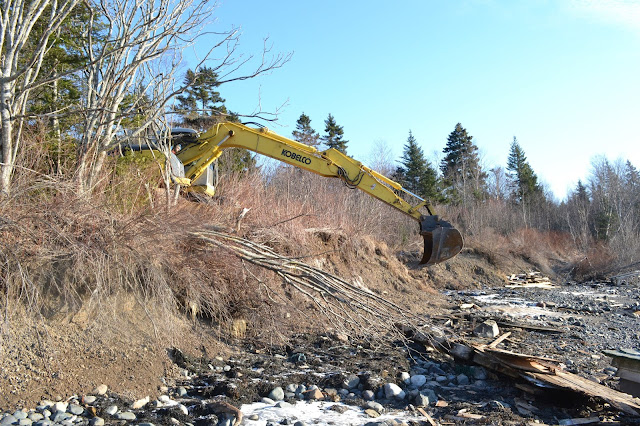 Contractor is hauling debris off the beach 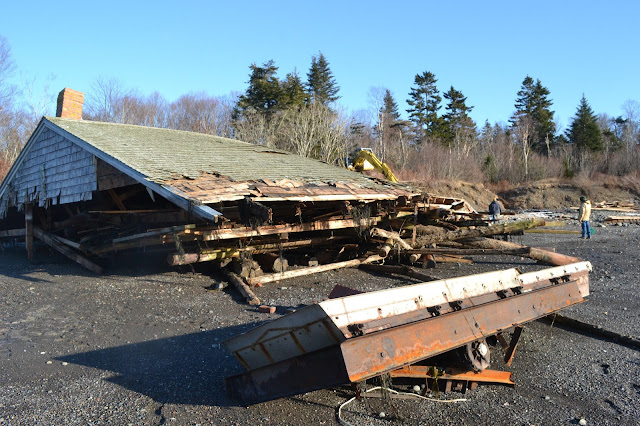 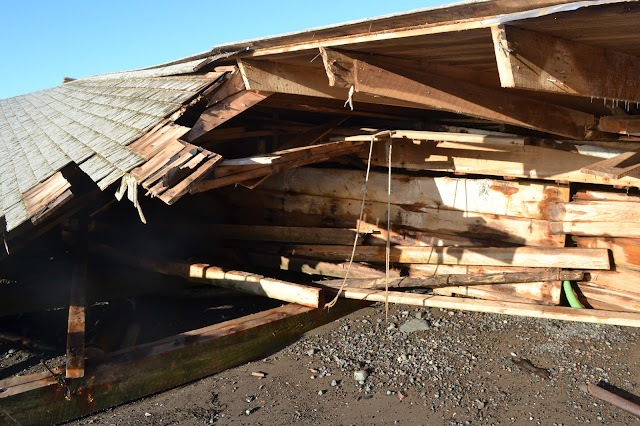 A look inside the old brine shed 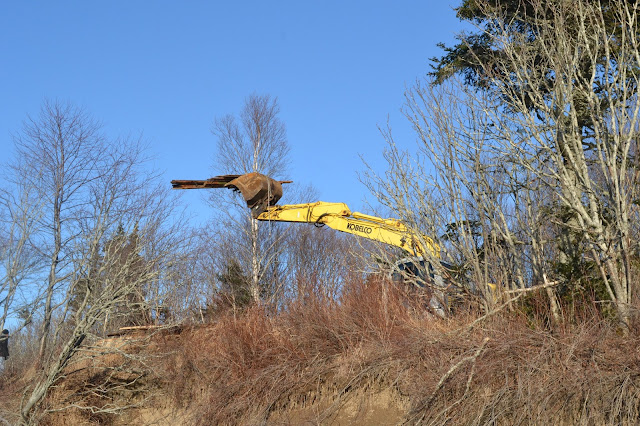 For Ms. Rubeor, who has begun trying to make amends, this fact has set in. Late last week, she arrived on the beach with cinnamon buns and began offering pieces of the shed, including bricks that appear to have been formed in Canada, to locals on the beach. "That seemed to be a civilized thing to do," she said, adding that she is apologetic for touching off a firestorm over the shed. She has agreed to an executive request that she resign from her position on Lubec's local council.

"I need to let the people of Campobello know that I am horribly, terribly sorry for all of the bad feelings that have gone back and forth," she said. "I probably was not empathetic with the Campobello side until I got talking with them. Now I feel terribly about it," she said.

On Tuesday, contractors had been hired on both the Canadian and U.S. sides of the border and work had begun to haul the shed's remains above the high tide line where it will not present a danger to fishermen. 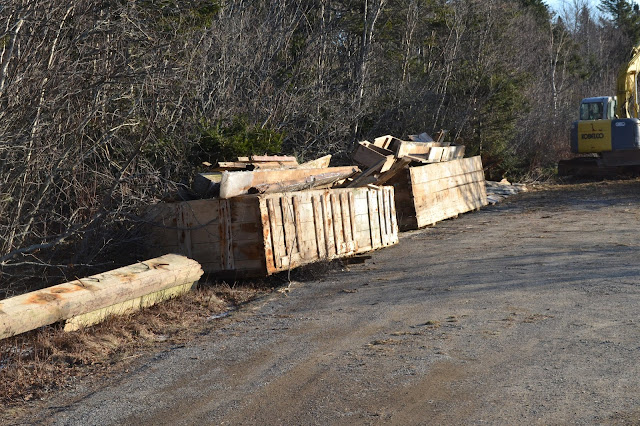 Materials waiting to be transported back to the American side

For her part, Ms. Parker is looking forward to shedding the image of a vandal and returning to the beach.
"I don't feel that I did anything wrong," she said. "The tide itself is the vandal, really."
Compiled by: Peter at 9:07 AM